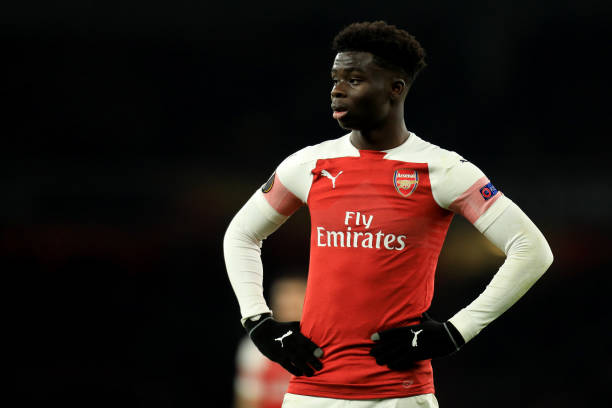 The gunners took on Qarabag last night and won the match thanks to a first half goal by Alexandre Lacazette who scored after getting an assist from Mesut Ozil. Arsenal boss Unai Emery included some youngsters in the lineup that played against Qarabag and Bukayo Saka was among those youthful players which the manager selected.

Saka had an incredible performance in the full 90 minutes and his playing style is similar to that of Reiss Nelson who was loaned to Hoffenheim in the summer. He at multiple times dribbled past the Qarabag defenders on the wing and he even came close to doubling Arsenal’s lead after receiving a great cross from Eddie Nketiah but he was denied by the Qarabag goalkeeper who stopped the ball beautifully.

Saka stats Vs Qarabag via Whoscored:

Most of the Arsenal fans were impressed with his performance against the Azerbaijan side and have already begun urging Unai Emery to bench Alex Iwobi so that he could start using the youngster. Arsenal boss Unai Emery had only words of praise for Saka after the match, here’s what he had to say about the 17-year-old.

“Today Saka also played with a good performance, with a very big personality and we were speaking at half-time. They were trying… his personality is very important for us to continue trying to go 1v1 and break lines with his quality.” Unai Emery told Arsenal.com.

“He played with a very big personality and sometimes with a very good performance. It’s very important for his confidence and for us also, because we can look at this player and see quality to help us.”

Unai Emery reveals his players’ progression in understanding his tactics