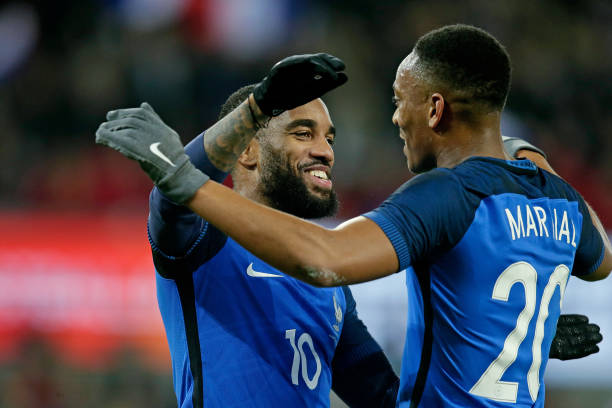 ( Lacazette and Martial / Photo via Getty )

Manchester United takes on Arsenal as they (Red Devils) visit Emirates Stadium on Friday. This presents an opportunity for both sides to make further evaluations as regards to their squad potential with respect to the ongoing January transfer window.

This have seen players like Eric bialy linked with rivals as Arsenal are said to be linked with the Ivorian center back.

However, with the available squad for both sides we proffer insight to the players who will influence the Arsenal/Manchester United clash among these two French forwards.

With the match drawing close in matter of hours we evaluate the player’s impact to the fixtures with respect to Alexandre Lacazette for Arsenal and Anthony Martial for the visiting side Manchester United.

Both players were surprisingly left out of the French squad that played in the 2018 World Cup in Russia last year.

This was debatable/amazing you may say as the pair of talent was dropped with former Arsenal star Olivier Giroud making the squad to the surprise of many alongside French sensation Kylian Mbappe.

This will be enough motivation for the players as they seek to recall to the Les Blues side. This will happen dependent on their impact for their respective clubs especially in games of this size.

Martial’s ability on the ball will be a threat to  Arsenal’s defence. This has been enhanced by the absence of right back (Hector) Bellerin due to injury that was picked up against Chelsea last weekend.

However Lacazette’s show of brilliance against Chelsea will be a massive encouragement to his confidence and his manager as they take on Ole Gunnar Solskjaer’s side at the Emirates.

This will motivate his teammates especially Pierre-Emerick Aubameyang to feed him as he’s prepared to do the damage like he has done several times this season.

Martial’s potential has been helped with massive results and positive euphoria created by United manager Solskjaer.

This is seen within the Red Devils mix as the Frenchman is set to confront the Arsenal defence with supplies coming from his compatriot (exceptional) Paul Pogba in midfield.

The fact that Lacazette scored a goal of that quality against Chelsea cannot be undermined as the Blues are known for their strong defensive connotation over the years.

This has been perpetuated by Italian managers in the exception of Charismatic manager Jose Mourinho. That’s what United will be up against as Lacazette unveils his attacking instinct against the Red Devil’s defence.

Martial may seem to have an upper hand as regards to his immense versatility on the pitch. Bellerin’s absence may have provided more reason why Arsenal’s defence might be exploited in this fixture as both players takes to the pitch against each other at the Emirates.

Mesut Ozil Vs Paul Pogba: What these players bring Into the FA Cup Clash at the Emirates.