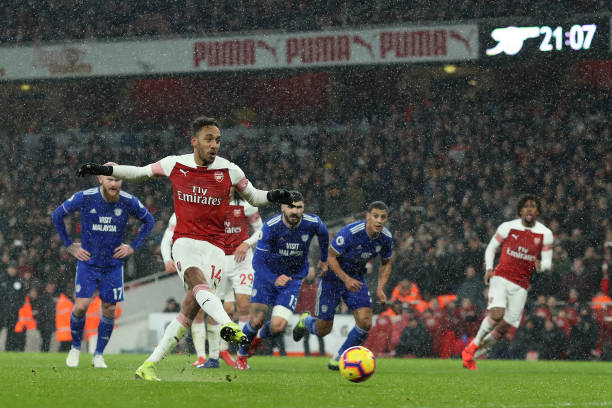 Arsenal signed Pierre-Emerick Aubameyang in the January transfer window in 2018 and the Gabon international has been impressive because he has scored a lot of goals. Aubameyang has went into the history books of Arsenal as he has broken a record that was held by the legends of the North Londoners.

The gunners faced Cardiff City last night and Aubameyang gave the gunners the lead in the second half by putting the ball into the back of the net after Arsenal was awarded a penalty. It wasn’t just a goal for Aubameyang but he even broke Thierry Henry’s record.

“Pierre-Emerick Aubameyang is the fastest Arsenal player EVER to have 25 Premier League goals.”

Thierry Henry scored 25 goals in his first 42 Premier League games while Pierre-Emerick Aubameyang has done it in 37 matches. This is a great stat for the Gabonese international because some football pundits said that he wouldn’t succeed in the Premier League because of his age but he has however proved critics wrong as he has so far scored 15 Premier League goals this season.

Pierre-Emerick Aubameyang will be hoping to continue his fine form and hopefully win the golden boot even though Mohamed Salah has high chances of winning it this season. Aubameyang is however usually criticised for scoring tap ins but the Arsenal fans will still be happy with him because all goals are valuable.