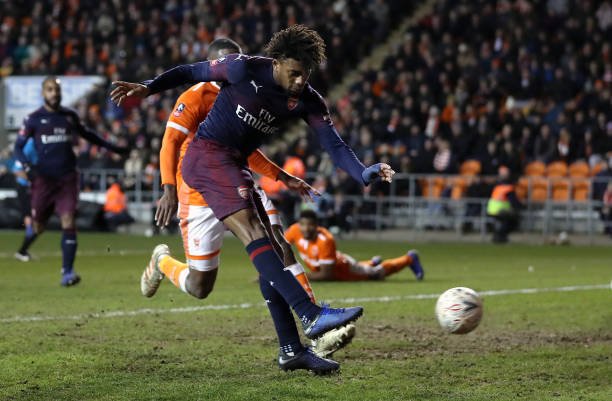 ( Blackpool Vs Arsenal / Photo via Getty )

Arsenal has qualified to the Emirates FA Cup fourth round after beating Blackpool 3-0 at its own home ground. Goals from Joe Willock (2) and Alex Iwobi were enough to give Unai Emery his first FA Cup win since this is the first time that he is coaching an English club.

It’s a great feeling to the Arsenal supporters because they were eliminated from the FA Cup last season at this very stage but it will be mportant for Unai Emery to try to make a big push to win this competition because it’s one of his only chances of silverware this season. The gunners started the match with a simple squad consisting of some youngsters like Maitland-Niles, Nketiah and Willock and they all put on a good performance.

Eddie Nketiah was positioning himself well but he however missed two great chances while he was in the penalty box. Arsenal’s first goal of the day came when Aaron Ramsey’s free-kick hit the post and Joe Willock reacted first to head home giving the gunners an early lead.

The gunners were in full control of the match despite being the away side and they later managed to double their lead in the 37th minute after Alex Iwobi combined with Carl Jenkison and Eddie Nketiah to set up Joe Willock’s second goal of the night. The first half ended 0-2 in favour of the gunners.

Arsenal started off the second half with less intensity as Blackpool tried to pull one goal back but most of their attacks failed after reaching the final third. Unai Emery then brought in Lacazette for Nketiah who was having a bad night.

The gunners kept putting pressure on Blackpool and finally got their third goal of the day after Alex Iwobi tapped in the ball after Aaron Ramsey’s shot got blocked by Mafoubi. So it’s a three nil win for Unai Emery and he will now focus on his next match.