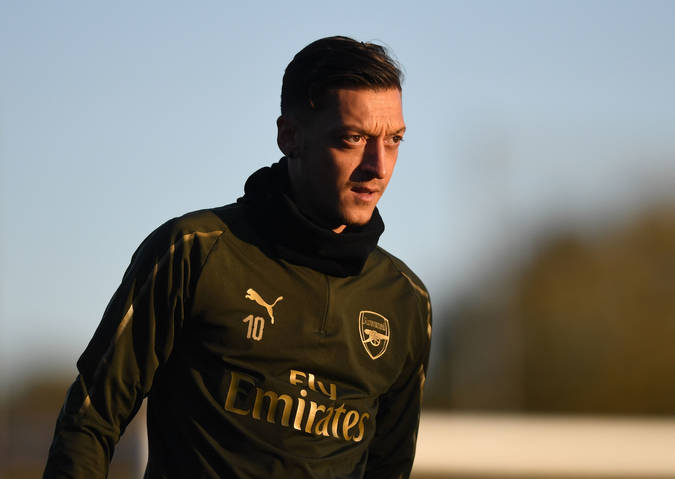 Mesut Ozil has missed Arsenal’s matches against Liverpool, Fulham and Blackpool but he has finally returned to full training and has even sent Unai Emery a message saying that he’s fully fit to play after finishing the whole week training with his teammates.

Arsenal boss Unai Emery and his squad will tomorrow be travelling to the London Stadium to take on West Ham United and Mesut Ozil will be hoping to be included in the squad that travels since some rumours say that the coach doesn’t usually want to use him in away matches because he struggles to impress in intense matches which aren’t played at the Emirates Stadium.

Mesut Ozil has been battling with a knee injury for about two weeks but he has taken part in the training sessions of Arsenal this week and he has tweeted a picture of himself in training captioned; “Full week of team training done”

So we will have to wait and see if Unai Emery will include Mesut Ozil in the starting eleven that faces West Ham United but the German international has sent him a clear message that he’s fit to feature for his team this weekend. Some Arsenal fans will be hoping that Unai Emery uses Mesut Ozil tomorrow because the gunners have lacked his creativity as explained in our article on why he’s needed in the West Ham United match.

There were even some transfer rumours linking Mesut Ozil away from Arsenal in December but his agent recently rubbished off those rumours and said that his client will let his football do the talking on the pitch.