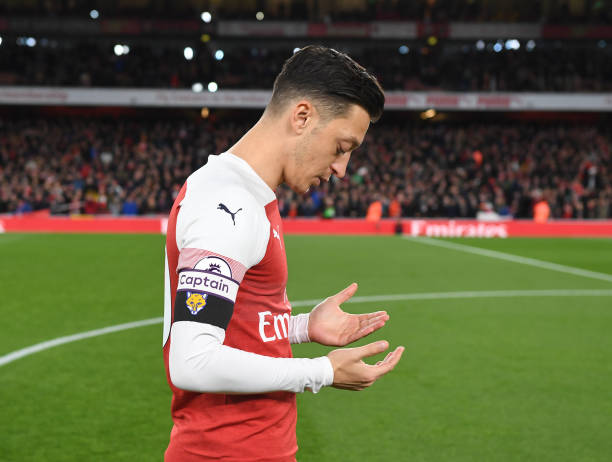 Mesut Ozil was left out of the Arsenal squad that traveled to the London Stadium to face West Ham United because Unai Emery believed that the squad which he used was enough to get the win for the gunners. The German international was left at the London Colney with Mohamed Elneny as they continued in door training.

Mesut Ozil has been at the Emirates Stadium for five years now and he was about to leave in January 2018 but he however decided to commit his future to the North Londoners because he said that he’s in love with the club and the city of London. Mesut Ozil has however found chances limited at Arsenal this season because Unai Emery doesn’t like his work rate yet he wants all his players to be hardworking.

Mesut Ozil was on the sidelines for a few weeks but he recently returned to full training this week but he however didn’t impress the coach in the training sessions hence getting dropped from the match day squad. The German international then later posted a video on Instagram in which he was with Mohamed Elneny and he said the following statement on Arabic.

“Don’t be sad, God is with us.” said Ozil telling Elneny.

The gooners will be hoping that Unai Emery settles the scuffle which he has with Mesut Ozil because it is ruining the team spirit and most clubs usually fail when a coach gets a personal problem with some of his squad members. Arsenal will soon be facing Chelsea at the Emirates Stadium and it will be a must win game for the gunners if they want to keep their top four hopes alive and hopefully, Mesut Ozil will be in the squad.

Unai Emery: Arsenal can lose even if Ozil starts