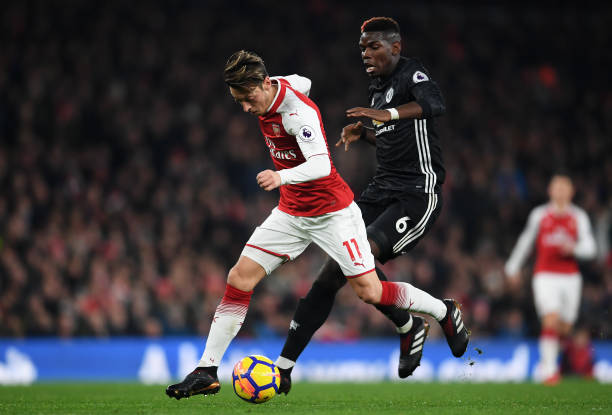 Arsenal may look favourites over the Red Devil’s as they defeated the might of Chelsea 2-0 at home at the weekend.

But with regards to the playing personnel available to both squads, we evaluate the individual that got upper hand in the fixture via their role for their respective teams. Mesut Ozil comes into play here as criticism continues to trail his club loyalty and performances along in the season.

Paul Pogba might have moved away from the wrong debacle that clouded/cash shadow to Manchester United’s season, under Jose Mourinho but the big one is here and now as United face Arsenal test away from home.

Pogba may have midfield advantage prior to his form and his midfield partner going into the Arsenal match but can they upstage the Gunners that are known for their dominant style of play as already seen this season?

Mesut Ozil will be at the tick of the action (midfield rumbling) as the host aims to assert midfield superiority over Manchester United as they did in the first leg. This promises to be an interesting competition between arguably two of the best midfield players on the (Mesut & Paul) planet Earth.

As Ozil’s creative instinct provides Arsenal with immense positivity on the pitch alongside the hardworking Lucas Torreira and Matteo Guendouzi, is obvious that Arsenal’s good to go. This Unai Emery must ensure he puts the necessary (playing schemes) things in place to validate the quality Arsenal got on ground ahead of this fixture.

The same goes to Manchester United manager (care-taker) Ole Gunner Solskjaer as he must create a system that afford (Paul) Pogba to find his attacking rhythm along with the midfield talents of Ander Herrera and former Chelsea man Nemanja Matic.

Time will tell as Pogba and Ozil brings light and positive sensation (illumination) for their sides on pitch. This makes the match worth watching as we readily await the FA Cup clash involving Arsenal and Manchester United on Friday.

Alexandre Lacazette Vs Anthony Martial; Who Can Influence the Arsenal/United game more?