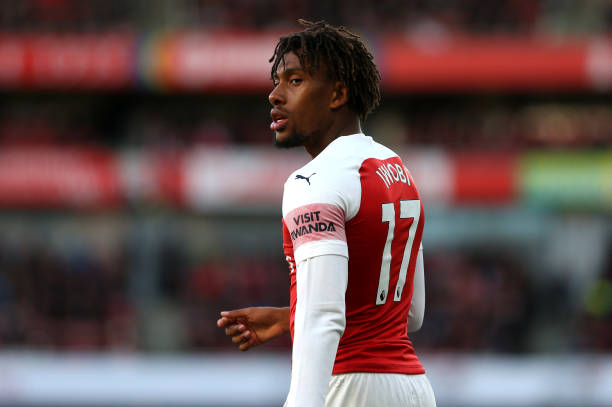 The gunners have struggled since their defeat to Southampton a few weeks back, that defeat not only ended their 22 game unbeaten run but also saw some of their players get injured in the following matches. Unai Emery has this season shown that he trusts Alex Iwobi because he has kept using the Nigerian international even though he has continually been criticized by the supporters.

Alex Iwobi was very impressive for the gunners in the months of September and October and that’s where he got nicknames like nutmeg king, Nigerian Messi and many others but he then later flopped in the following matches but Unai Emery kept including him in his starting eleven because he has a good work rate and is Arsenal’s only natural winger.

Unai Emery would however substitute Alex Iwobi at halftime sometimes because of having poor performances but the young Nigerian international has drastically improved in the last few matches. Check out this stat:

So it seems Arsenal’s head coach Unai Emery must have had a one on one conversation with Alex Iwobi so that he could improve on his game. We have analysed something different to Alex Iwobi’s performance in the last four matches and have discovered two main aspects of his game which Unai Emery has addressed and one of them is: “EXCESSIVE DRIBBLING”.

It seems Alex Iwobi was flattered with the reactions of Arsenal fans when he made some dribbling tricks a few months ago and at the start of last month, he would be given the ball on the wing and just make excessive dribbling until he loses the ball but we haven’t seen him do such mistakes in the last four matches.

And the other aspect of Alex Iwobi’s playing style that has improved is; “MAKING CROSSES” Most of the Arsenal fans have always complained that the Nigerian doesn’t cross the ball even when in a good position but if you watch the Liverpool and Fulham game, you can see that the winger has this time been making some good crosses when he gets space.