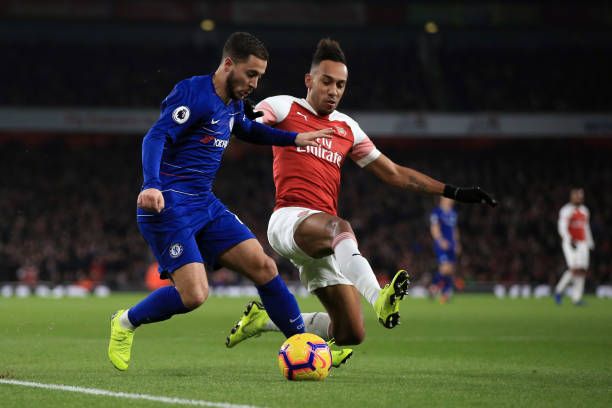 Arsenal welcomed Chelsea at the Emirates Stadium last night and they got all the three points thanks to goals from Alexandre Lacazette and Laurent Koscielny. Pierre-Emerick Aubameyang also got some chances to go on the score sheet but he missed them but his teammates were able to seal the win.

Pierre-Emerick Aubameyang has been an outstanding player this season because he has scored 14 goals but he however did extra work in the match against Chelsea because he was tracking back and giving the Arsenal defence a hand in stopping the visitors from scoring.

Aubameyang was great defensively because he made two great tackles that were hugely needed because Chelsea were putting pressure on the gunners. This has been one of the things which Unai Emery wants from all his players because he has in most press conferences said that he wants all the players to press the opponents until they will lose the ball.

Arsenal head coach Unai Emery was happy with what Aubameyang did and he commented on the defensive work done by the Gabon international in the Chelsea match.

“I think every player contributed with their work. First is the attitude to be together when we are with the ball, to find the space and also to find the moments to attack against them.” Unai Emery told Arsenal’s official website.

“Today, above all, is when we are not with the ball, the possession I think was more than 60 per cent for them, is when we need to recover with good pressing.”