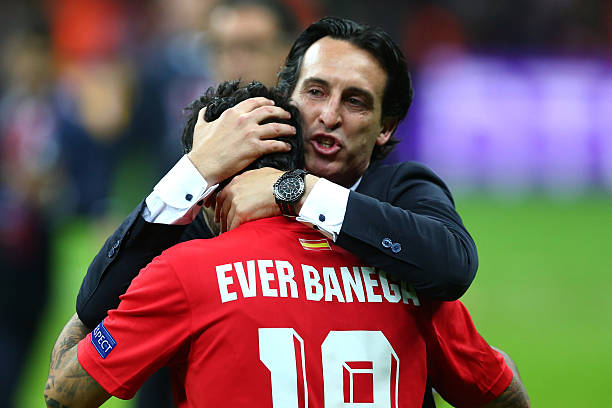 ( Unai Emery and Ever Banega / Photo via Getty )

Ever Banega was the first player to be linked with a move to Arsenal when the transfer window opened but those rumours slowly faded as the gunners now got linked with Denis Suarez. It is believed that Unai Emery wanted him but the board didn’t want to sign him.

The transfer rumours linking Ever Banega to Arsenal returned on Thursday morning with most reports claiming that Ever Banega was going to join the gunners on a £30million move from Sevilla, but they were published before Unai Emery had announced how the gunners cannot sign players permanently in the January transfer window.

Arsenal boss Unai Emery faced the media on Thursday to discuss about their match against West Ham United and to clear the air about some transfer rumours that have spread in the last few weeks. The Arsenal coach was asked by a reporter about what he thinks of Ever Banega and he replied saying; ““I know this player and he’s a very good player.”

And if he could reveal more about Ever Banega? Unai Emery said speaking to Arsenal Media.

“I cannot tell you more. I can say to you that the club is working, the club is telling me the different situations in each moment.” said the Arsenal boss.

“At the moment, we haven’t had any news today about that.”

Ever Banega coming to the Emirates Stadium on loan is not possible because Sevilla would only let go of him if a club activated his release clause but the gunners might however get Denis Suarez according to reports. And most Arsenal supporters are happy that Ever Banega might not be joining them because they were complaining that he is very old.