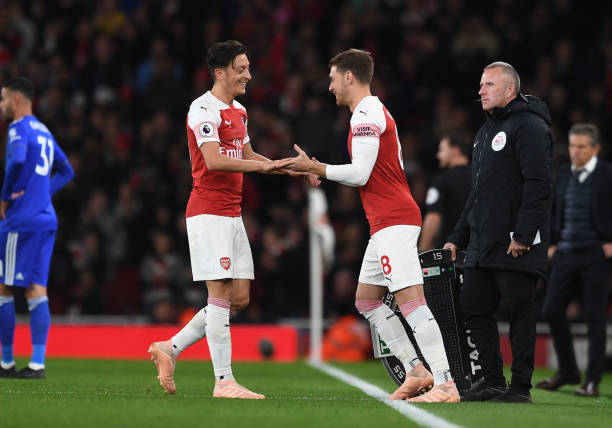 The gunners are this season under the management of Unai Emery after having been with Arsene Wenger for 21 years. The new Arsenal coach has had problems with Mesut Ozil because he hasn’t shown any signs of getting used to the playing style which Unai Emery wants to introduce at the Emirates Stadium.

Arsenal boss Unai Emery said he was going to build his team around Aaron Ramsey when he had just been appointed as the new coach of the gunners but the Wales international has seen a contract offer from the club withdrawn after the North Londoners changed their mind about keeping him. It is reported that Aaron Ramsey will be joining Juventus at the end of this season and the chief of the Italian giants has already confirmed their interest in the Wales international.

Arsenal head coach Unai Emery faced the media today ahead of their FA Cup match against Blackpool on Saturday and he was asked about the future of Aaron Ramsey and he confirmed that the midfielder is committed to helping the gunners this season.

“I don’t know. I want his focus every day with us on training and thinking for the next match, which is against Blackpool.” Unai Emery told Arsenal’s official website in response to Ramsey getting linked to Juventus.

Aaron Ramsey will probably be in the starting eleven that faces Blackpool on the weekend because he was benched on Tuesday when the gunners played Fulham at the Emirates Stadium.

Mesut Ozil has not played for the gunners in their last two matches against Liverpool and Fulham because he has a knee injury. It’s unclear when he will be returning from this injury but he’s currently linked with a number of clubs but Unai Emery has said that the reports aren’t true because he is waiting for the German international to return to training.

“I am only waiting for him (Ozil) to be OK to play.” said Unai Emery.