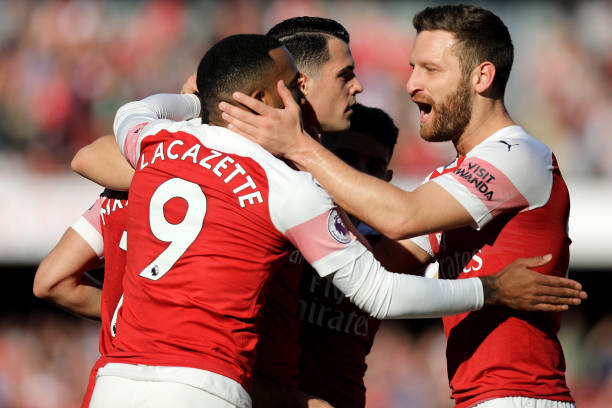 ( Arsenal Vs Southampton / Photo via Getty )

Arsenal has gone back to the Premier League top four thanks to two goals from Alexandre Lacazette and Henrikh Mkhitaryan in the first half hence collecting three points from Southampton. It was the most comfortable game that the gunners have played at the Emirates Stadium this season because they had many chances of making the score line 4-0 but they however missed them hence the game ending 2 nil in favour of the North Londoners.

There was a bit of uproar in the Arsenal fan base when Unai Emery decided to start the match without Mesut Ozil but Aaron Ramsey did have an incredible performance vs the Saints who looked dreadful at the Emirates Stadium. Alexandre Lacazette gave the gunners the lead in the seventh minute after a silky cross saw the Frenchman flick the ball into the back of the net.

Arsenal looked very wonderful in attack because Lacazette, Kolasinac, Iwobi and Ramsey were linking up well with each other in the final third while Mkhitaryan kept putting pressure on the other flank. Arsenal finally got their second goal of the day after Alex Iwobi made a beautiful cross which found Mkhitaryan in a perfect position and he made no mistake but put the ball into the back of the net.

The second half started off with no changes and that is a sign that Unai Emery was happy with the performance because he usually made halftime substitutions at the start of the second half last year. Southampton made some changes and those players spanked up their attack as they put pressure on the Arsenal defenders but the gunners remained intact thanks to Sokratis, Mustafi and Stephan Lichtsteiner.

Arsenal was later forced to make a substitution as Stephan picked up an injury and got replaced by Laurent Koscielny. After a couple of minutes, Ozil replaced Aaron Ramsey who had an incredible performance in the first half. Aubameyang also replaced Iwobi who had started limping.

There were moments where Southampton had chances of scoring but Bernd Leno was at his best. Mesut Ozil made two great passes that could have helped Aubameyang get on the score sheet but he missed them hence the match ending 2-0 in favour of Arsenal.