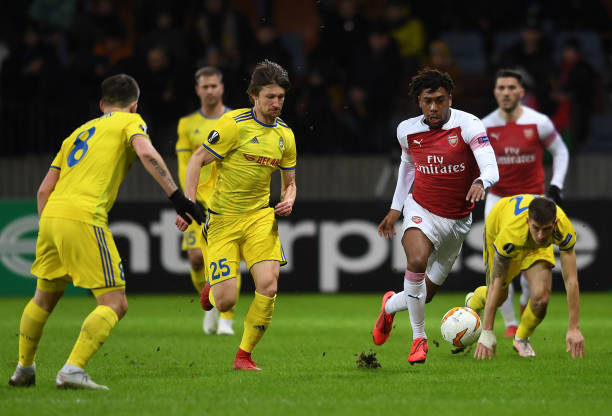 The gunners will on Thursday welcome Bate Borisov at the Emirates Stadium and it’s an awkward game for the North Londoners who were expected to finish this tie in the first leg but the Belarusian side surprised the whole world when it defeated Arsenal one nil.

This defeat has put pressure on Arsenal boss Unai Emery but the return leg will be the perfect way to prove that he is the right man for the job to make the gunners great again. Bate Borisov will come into this game hoping to stay at the back and resort to counter attacks and set pieces as they did in the first match in Belarus.

Arsenal has today welcomed back Aaron Ramsey to the squad after missing two matches because of a knee injury and the Wales international could be instrumental in taking the gunners to the next round, since Unai Emery usually trusts him more than Mesut Ozil in these kind of matches.

The gunners will likely change their formation on Thursday to a 4-2-3-1 because Sokratis Papastathopoulos has returned to full training and Unai Emery might want to use it since it suits Mesut Ozil. Sokratis return is very important for Arsenal because this will possibly see Shkodran Mustafi get benched because he is very inconsistent.

Arsenal boss Unai Emery said that he respects Bate Borisov and he reaffirmed everyone that they will progress to the next round because he trusts his players and their fans who will be cheering them up as they try to progress to the UEFA Europa League round of 16.

BATE Borisov Vs Arsenal: What to expect from this game