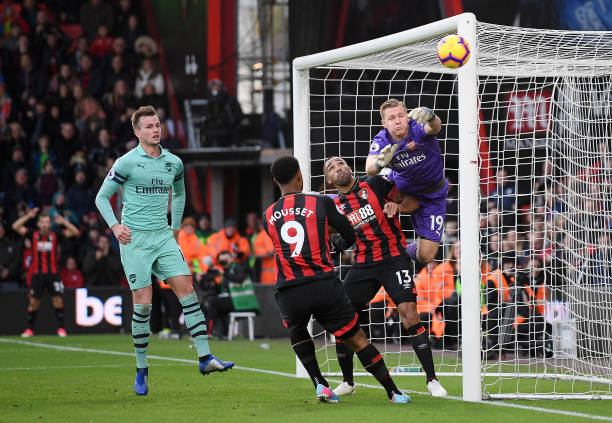 ( Bournemouth Vs Arsenal / Photo Via Getty )

The Premier League has returned after just three days and Arsenal will on Wednesday welcome 10th placed Bournemouth at the Emirates Stadium. The gunners have won the last two games at the Emirates and a win vs Bournemouth would be the perfect morale booster ahead of the North London Derby.

Bournemouth will come into this match with less hopes of getting a win at the Emirates and getting a draw would make them happy since they are currently in an injury crisis. Arsenal will on the hand be desperate to get all the three points from this game because the Premier League top four race is very tough because both Manchester United and Chelsea are eager to occupy the 4th position.

Arsenal head coach Unai Emery has said that he will keep rotating his squad because the gunners are playing three matches in 10 days so we will be expecting a different lineup from the one used on Sunday when they faced Southampton. We could possibly see Mesut Ozil and Matteo Guendouzi return to the starting eleven in the Bournemouth game and Denis Suarez could finally be given a start after almost a month of way waiting.

The latest team news of Bournemouth confirm that they will be without Brooks, Lerma, Stanislas and Cook. This will definitely be good news for the North Londoners because those players involved in the famous Bournemouth win over Chelsea.

Arsenal’s latest team news have confirmed that Ainsley Maitland-Niles has returned to full training while Stephan Lichtsteiner & Alex Iwobi will be assessed before the match. Hector Bellerin, Danny Welbeck and Rob Holding will not be involved in this game because they have long-term injuries.