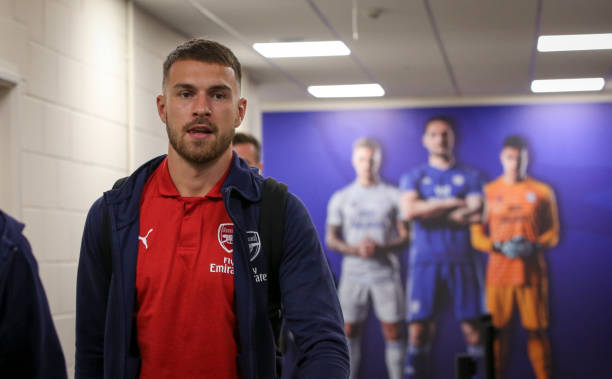 ( Soon to be Juventus star Aaron Ramsey / Photo via Getty )

Aaron Ramsey has signed a pre-contract with Juventus and he will join them at the end of this season after the gunners failed to meet his wage demands. It is no longer rumours that Aaron Ramsey will be joining Juventus because he has already confirmed this to the world.

Arsene Wenger signed Aaron Ramsey from Cardiff City a decade ago and the midfielder was very crucial for the gunners in the next couple years but a career threatening injury ruined his form but he later regained it, and helped Arsenal win three FA Cups with him scoring in two of the finals. Aaron Ramsey is in the final months of his current contract at the Emirates Stadium and Arsene Wenger used to say that they would soon renew it when he was still the manager of the North Londoners.

It is believed that the new top officials at Arsenal are the reason why Aaron Ramsey will leave this summer because they didn’t want to offer him a big money deal. That’s all in the past now and Aaron Ramsey will reportedly start earning £400k a week wages when he joins Juventus on 1st July. Arsene Wenger hasn’t restarted coaching and is currently more into punditry as he waits for what the future holds for him but he recently spoke about Aaron Ramsey at the Laureus Sport for Good presentation.

“I must say it will be an interesting move for Ramsey. He is a player who is great going forward. His main quality is he can keep the final ball. And he makes interesting runs from deep.” said Wenger.

“You don’t find many players today who can make midfield runs off the ball. It will be an interesting addition for Juventus.”