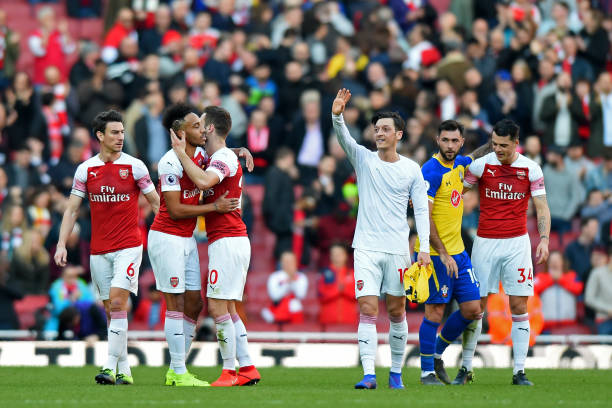 Arsenal has now won its last two matches vs BATE Borisov and Southampton and the fans will be hoping that the club puts on a good run of incredible performances starting now. Shkodran Mustafi and Sead Kolasinac were in the starting eleven and they had an incredible performance. Mesut Ozil also came in the second half and he also created some great goal scoring chances but Aubameyang was a bit rusty.

The German defender has this season been heavily criticized for making errors that lead to goals but he put on a good performance vs the Saints. He didn’t make any mistakes today and this is a great indication that he is improving as a player so the Arsenal fans will be hoping that he puts on similar performances in their upcoming matches vs Bournemouth and Tottenham Hotspur.

The German international reacted on the win by taking to Twitter to send a message to the Arsenal fans.

The Arsenal fans were disappointed that Unai Emery did not include him in the starting eleven but his substitute appearance turned out better than we all expected because he many chances more than Aaron Ramsey who had played 60 minutes. As he always does, the Arsenal play maker was the first to speak out about this game.

Ozil wrote; “3 more points for us at the Emirates! See you again on Wednesday. Enjoy the rest of the weekend Gooners!”

The Arsenal left back was not used on Thursday when the gunners faced Bate Borisov but he however had an incredible performance in today’s game in both defensive and attacking moments. The player wrote; “Home streak is on. See you again on Wednesday.”

Mkhitaryan reveals the moment that helped them beat Southampton

Arsenal Vs Saints: Predicted XI with all eyes on Lacazette and Ozil