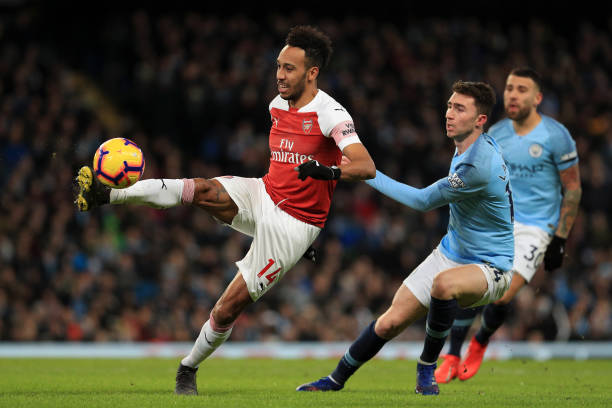 Manchester City was victorious on Sunday as Sergio Aguero took it personally to wreak havoc against the Arsenal defence.

How about that for a hat-trick as the Argentine took the match ball at the end of the match? Manchester City was the better side on the night as they have beaten Arsenal twice this season.

This sees City’s title campaign back as they hope for an interesting outing between them and Huddersfield Town at the weekend.

On this note, we evaluate what the statistics say as regards to Arsenal’s 3-1 loss.

Arsenal’s weakness was indicated in the stats above as City dealt a blow to their season just as they did on the Match Day 1.

The home side was rampaging against Arsenal’s defence in the absence of Hector Bellerin as the Citizens mesmerized the visitors.

The statistics above shows clearly how dull the Gunners were in the Etihad contest as they offer little going forward.

Manchester City got 3 shots off target coupled with their impressive 12 on target as Arsenal managed only 1 effort off target in the game.

This was Arsenal’s undoing as they deservedly lost 3-1 to City.

The Gunners was not at par with City’s midfield play as the Citizens amassed a greater share of the ball in midfield.

This is no surprise though it’s Arsenal as Pep Guardiola’s side is known for their possessive style of play.

They gave City the midfield ascendancy to rip Arsenal apart as Unai Emery’s team conceded three times in the course of the match.

Arsenal’s relative inactivity was evident as they got only 2 corner kicks compared to Manchester City’s 4 in the match.

This was due to the host’s dominance as they pegged Arsenal a couple of times in defending. This produced corners as the Gunners sought to preserve their vital area from further goals.

Arsenal got no offside in the match compared to Manchester City who had five Offsides in the match.

This was due to the Citizens attacking persistence as they aim to force their way back in Premier League contention.

This they deservedly achieved as they beat Unai Emery’s visiting side 3-1 at the Etihad.

The match produced a total of 20 (12+8) fouls as both teams compete with each other within the stipulated 90 minutes.

This got City making more challenges as they accumulated 12 fouls compared to Arsenal’s 8 fouls.