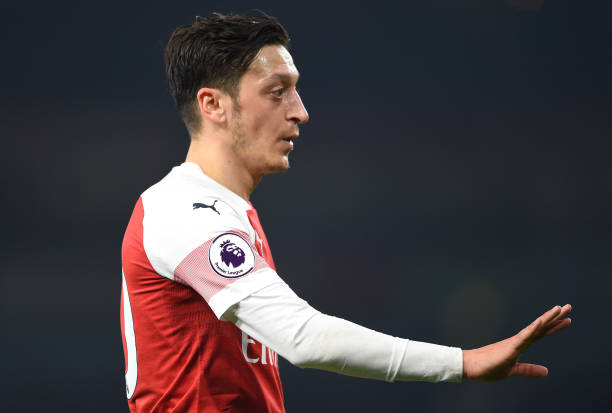 Arsenal beat Bournemouth 5-1 on Wednesday and Mesut Ozil was involved in two of those five goals. It was great to see him back into the starting eleven after having played a few minutes in Arsenal’s 2 nil win over Southampton last weekend.

Mesut Ozil was included in the starting eleven and he opened the scoring in the first minutes of the game, and the Arsenal fans were mesmerised by his kicking the ball into the ground technique which gave them a much-needed early goal. The German international later assisted Henrikh Mkhitaryan to score Arsenal’s second goal of the day.

Mesut Ozil almost scored another goal in the second half but his shot unfortunately hit the post but he really had an incredible performance. His performance was similar to that he had against Leicester City in the first months of the new season, Unai Emery will be hoping that he becomes consistent because he’s talented.

Mesut Ozil immediately took to Twitter to send a message to the Arsenal supporters after their win over Bournemouth.

#YaGunnersYa ???????? Five-Star team performance tonight! Happy for everyone at the club and for all the fans! ????????#WeAreTheArsenal #M1Ö #COYG @Arsenal pic.twitter.com/rL5ZuWUw3C

“Five-Star team performance tonight! Happy for everyone at the club and for all the fans.”

Arsenal will face Tottenham Hotspur away from home on Saturday and it will be a must win game for the gunners who are now hoping to climb up to the third position since Spurs have dropped six points from their last two matches. Most of the Arsenal fans are urging Unai Emery to let Mesut Ozil start this game because he has proven his importance to the team this week.