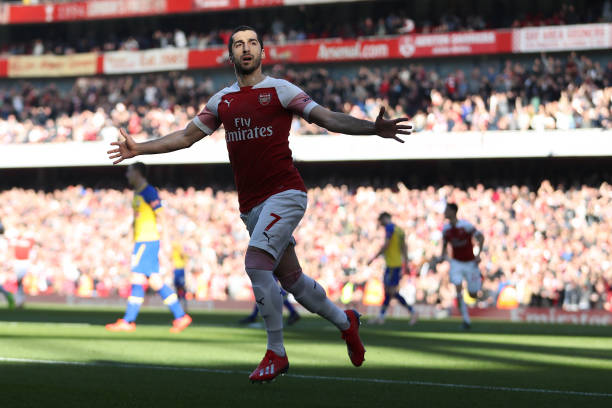 The gunners faced Southampton at the weekend and they got a 2-0 win thanks to goals from Henrikh Mkhitaryan and Alexandre Lacazette. It was a must win game for the North Londoners if they wanted to get into the Premier League top four and Unai Emery’s men were able to get the job.

Southampton are the team that ended Arsenal’s 22 game unbeaten run and most of the fans are still hurt because of this defeat because it was a game which they never expected to end as a defeat even though it was played at the Saint Mary’s Stadium. Things were little different this time because Arsenal was the first to get on the score sheet through Alexandre Lacazette.

Arsenal later doubled their lead through Henrikh Mkhitaryan who was at the right position to put the ball into the back of the net thanks to a great cross from Alex Iwobi. The match was completed in the first 45 minutes because neither of the teams scored any goals in the second half despite both of the teams getting good chances.

Arsenal midfielder Mkhitaryan has said that Bernd Leno’s save that saw them start a move that ended up becoming Alexandre Lacazette’s goal was very helpful in them winning the game. The Armenian international thanked the goalkeeper for keeping them in the match.

“We had a great first half. I think if it wasn’t for Bernd Leno’s save, we wouldn’t have scored the first goal so that’s thanks to him.” Mkhitaryan told Arsenal MediaArsenal Media.

“He did half of the job. In the second half, it was a bit different because they came into the game more, but we had a bit more spaces for counter-attacking and could have scored more goals. Unfortunately we didn’t.”

Arsenal star speaks out on Lacazette’s importance to the team

Kolasinac, Ozil and Mustafi react on Arsenal’s win over Southampton