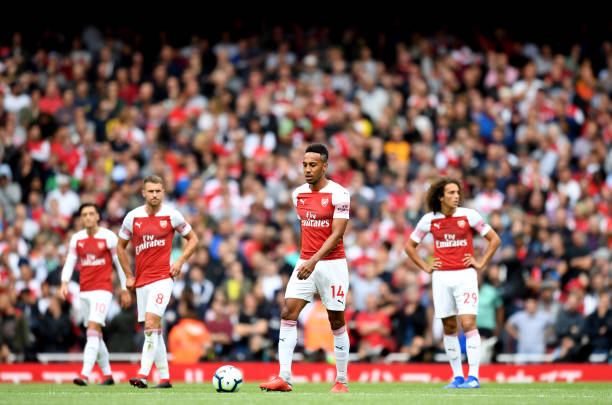 Arsenal will today face Manchester City at its home ground and they will be hoping to return to London with all the three points. Arsenal boss Unai Emery will be hoping to get this win so that he can show the fans that he was the right man for the job but he will however need to use his best starting eleven.

Bernd Leno is Arsenal’s first choice goalkeeper because Unai Emery no longer trusts Petr Cech because he has been inconsistent. So the German international will definitely be in between the goal posts.

Arsenal boss Unai Emery likes playing three at the back but that experiment never worked well a few months ago so he will go for a back four. Koscielny will probably start as centre back since Dinos Mavropanos can’t be put in a big game as today’s, so Arsenal’s back four will consist of Jenkinson, Mustafi, Koscielny and Kolasinac. Jenkinson could get his first Premier League start because he impressed in the Cardiff City game.

Unai Emery used the above formation on Tuesday so he might use it tonight, Denis Suarez could get his debut today and be put together with Matteo Guendouzi & Lucas Torreira so that the gunners can have enough creativity.

Mesut Ozil could start in this position but this will be a match with a lot of intensity so Arsenal’s boss Unai Emery will definitely use Aaron Ramsey since he is very strong and can mark certain players well.

Arsenal fans have successfully convinced Unai Emery to be using Lacazette and Aubameyang as strikers together. These two will lead the line for the gunners this evening.

Three things Arsenal must do to beat Manchester City