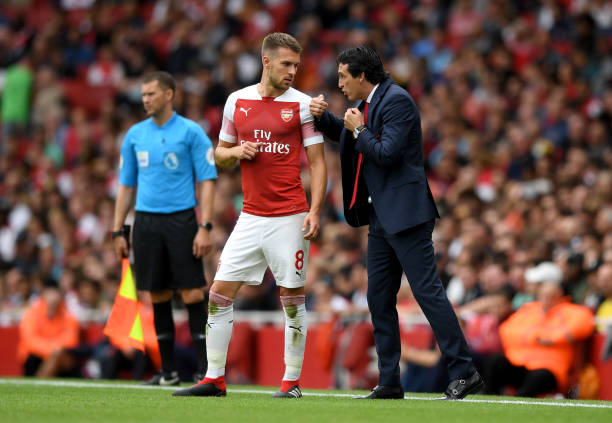 Aaron Ramsey will join Juventus at the end of this season after agreeing to a four-year deal with the Italian Serie A Champions but the question remains; why did Unai Emery and his bosses not stop the Welshman from leaving yet he attracted a lot of interest from top European clubs.

The Aaron Ramsey transfer saga started when a report broke out which claimed that the gunners had withdrawn their offer (extending Ramsey’s deal at Arsenal) without any reason and the player was also asked in an interview, and he said that he doesn’t know why the club made this decision but said that he will be waiting for answers from the club.

There are rumours that Unai Emery is the one who told the club to withdraw the offer because he thought Aaron Ramsey isn’t in his long-term plans for Arsenal so there must be a replacement in mind ( a  summer transfer target ) or maybe he is already replaced by one of the players in the squad right now. And yes it could true, Unai Emery believes that Matteo Guendouzi could be a great replacement for Aaron Ramsey even though it would sound awkward to most Arsenal fans.

Arsenal’s boss Unai Emery has used many formations this season but what’s clear in all those systems used is that he wants two central midfielders with a good work rate and that don’t go further forward. Honestly, Aaron Ramsey has been used in various positions in his time at Arsenal but in Wenger’s era, he claimed that he wanted to be a central attacking midfielder ( CAM) yet it was impossible since Mesut Ozil was on form.

Aaron Ramsey as a central midfielder (CM) also doesn’t work out well because he likes going forward and this usually leaves a huge burden on the defensive midfielder so those could be one of the reasons why Unai Emery saw that the Welshman wouldn’t be a perfect fit in his future plans. Matteo Guendouzi is one of the players that Unai Emery likes because he has a despicable work rate, can do long passes, good tackler and doesn’t have a huge urge to attack like Ramsey

More importantly, Unai Emery doesn’t like using formations that require a CAM aka a no.10 and that is among the positions which Aaron Ramsey can play in. So Arsenal fans, you may have a replacement for Aaron Ramsey in the name of Matteo Guendouzi. He is still young and can still develop to be a better player than Aaron Ramsey.