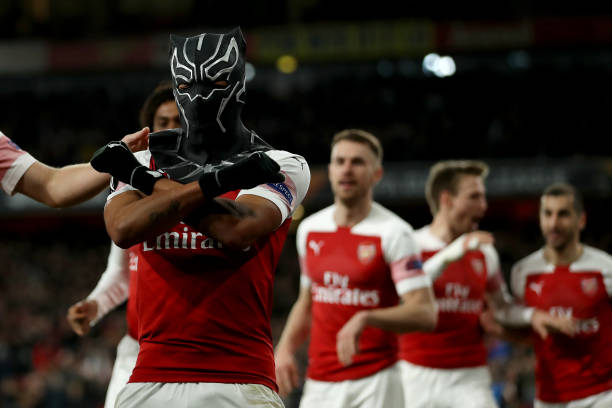 ( Aubameyang finally brings out the mask / Photo via Getty )

Arsenal has qualified to the UEFA Europa League quarter finals thanks to a splendid performance at the Emirates Stadium that has seen Rennes get eliminated from this European competition. Three goals from Pierre-Emerick Aubameyang (2) and Ainsley Maitland-Niles were enough to see Unai Emery and his team walk their away into the quarter finals thanks to an aggregate score of 4-3.

Rennes beat Arsenal 3-1 last week in the first leg but the North Londoners have once again confirmed that they have made the Emirates Stadium their fortress because they have done a similar come back to which they did in their UEFA Europa League round of 32 tie against BATE BORISOV.

Arsenal boss Unai Emery was bold enough to use the same squad that defeated Manchester United on Sunday but he however replaced Leno with Cech while Mustafi filled in for Sokratis who was suspended. The gunners started the first half with high tempo and went in front in the 5th minute after Ramsey gave a great pass to Aubameyang who put the ball into the back of the net.

14th March 2019, Emirates Stadium, London, England; UEFA Europa League football, round of 16, second leg, Arsenal versus Rennes; Pierre-Emerick Aubameyang of Arsenal celebrates in a spiderman mask with Sead Kolasinac as he scores for 3-0 in the 72nd minute (photo by Shaun Brooks/Action Plus via Getty Images)

It took Unai Emery’s men just 10 minutes to double their lead through Ainsley Maitland-Niles who headed past the Rennes goalkeeper to score his first European goal. It was a special moment for him and the Arsenal fans now felt a bit of peace well knowing the aggregate score board was reading 3-3 on aggregate. Rennes did try to get back into the game in the last minutes of the first half but they however failed and it ended 2-0 in favour of the North Londoners.

Rennes started the second half well because they looked determined to score and even hit the post but they still failed to get on the score sheet because of offside traps and poor finishing. As we approached the last 20 minutes of the game, Lacazette and Ozil were replaced by Iwobi and Henrikh Mkhitaryan.

14th March 2019, Emirates Stadium, London, England; UEFA Europa League football, round of 16, second leg, Arsenal versus Rennes; Pierre-Emerick Aubameyang of Arsenal celebrates with a spiderman mask as he scores for 3-0 in the 72nd minute (photo by Shaun Brooks/Action Plus via Getty Images)

It didn’t take long for the gunners to get their third as Mkhitaryan found Sead Kolasinac on the flank and the wing back made a great cross to Aubameyang who scored his second goal of the day, and pulled out his Blank Panther mask. The Gabon international had more chances to get his hatrick but he missed them even though he had a clear sight of the net. In the last minutes, Ramsey was replaced by Torreira and the Welshman received a great applause from the Arsenal supporters.

Rennes did put pressure on Arsenal in the last minutes of the game but the gunners have progressed to the UEFA Europa League quarter finals on an aggregate score of 4-3.