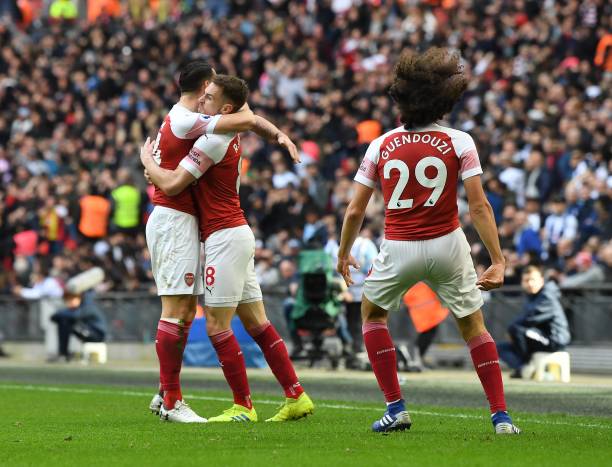 The North London Derby ended in a 1-1 draw and it was a very emotional match because of the determination shown by the players of the two teams. The gunners played the match with an intent of staying compact at the back and it worked because a quick simple counter attacking move saw Arsenal go into the lead through Aaron Ramsey who rounded up Huge Lloris before shooting the ball into the back of the net.

The gunners then continued with their game plan of playing safe but Tottenham Hotspur scored a goal through Harry Kane but it was ruled out because the English international was off hence Arsenal surviving. Arsenal did not do a lot in the first half aside from being very composed at the back as they let Tottenham Hotspur try breaking down their defence but they however failed because Unai Emery’s back four worked hard to protect their goalkeeper. Bernd Leno made some impressive saves before the end of the first half.

The first half ended 0-1 in favour of the gunners and Unai Emery subbed Matteo Guendouzi off to bring in Lucas Torreira so that he could tighten up the midfield because the young Frenchman was making a lot of mistakes. Alexandre Lacazette later got a chance to double Arsenal’s lead but he sent his shot wide.

L-R Pierre-Emerick Aubameyang of Arsenal and Tottenham Hotspur’s Moussa Sissoko
during during English Premier League between Tottenham Hotspur and Arsenal at Wembley stadium, in London, England on 2 Mar 2019.
(Photo by Action Foto Sport/NurPhoto via Getty Images)

A few minutes later, Aubameyang replaced him because Unai Emery wanted to make use of his pace since the Tottenham Hotspur defenders were tired. Aaron Ramsey looked exhausted and Mesut Ozil replaced him in the last 20 minutes of the game. A few moments later, Tottenham Hotspur got a free kick and Mustafi appeared to have pushed Kane hence the home side getting a penalty.

Harry Kane once again scored Arsenal in a penalty kick, sending Bernd Leno the wrong way to make it 1-1. There was a lot of drama in the last minutes of the game because Aubameyang got fouled in the penalty box and he took it but it was saved by Hugo Lloris hence the score line staying 1-1. Lucas Torreira received a red card in the last seconds of the game but the match ended 1-1.