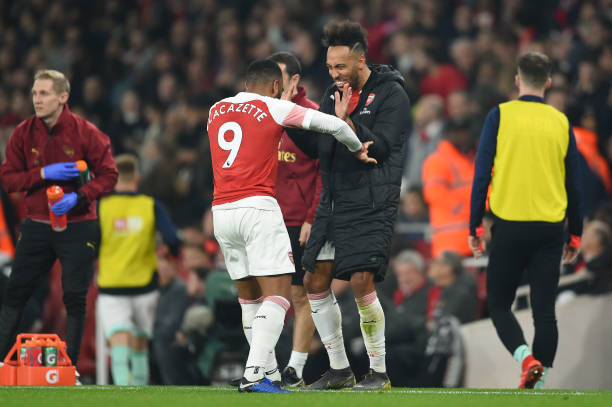 Alexandre Lacazette joined Arsenal in the 2017 Summer transfer window and he has been impressive this season than he was in his first campaign as an Arsenal player. Most football pundits said that the gunners made a mistake to sign Aubameyang in the January transfer window because having two good strikers at a club would make one unhappy hence him pushing for a move away from the club.

Alexandre Lacazette’s partnership with Pierre-Emerick Aubameyang has been great because these two are friends on and off the pitch, and they always celebrate goals together when one of them scores which is very good for the North Londoners because they need them to be happy. Arsenal’s head coach Unai Emery prefers playing with one striker upfront and this sees one striker start on the bench but they have both managed to score over 28 goals.

Usually when a club has two good strikers, there’s always rivalry that can even be seen off the pitch but the relationship between Aubameyang and Lacazette has been fantastic for the club because they both look happy at the club. Lacazette has spoken about his rivalry with Aubameyang and he says that they both want to help the gunners to succeed.

“I’m always asked about my ‘rivalry’ with Auba, but it’s not like that at all. We know that if we are together, we can stronger and we just have the same target together, which is to win something for the club.” Lacazette told Arsenal’s official website.

The Arsenal fans will be hoping that these two continue working together so that they can bring back Arsenal’s lost title of being one of the best teams in Europe.

Unai Emery speaks out on Koscielny, Xhaka and Kolasinac