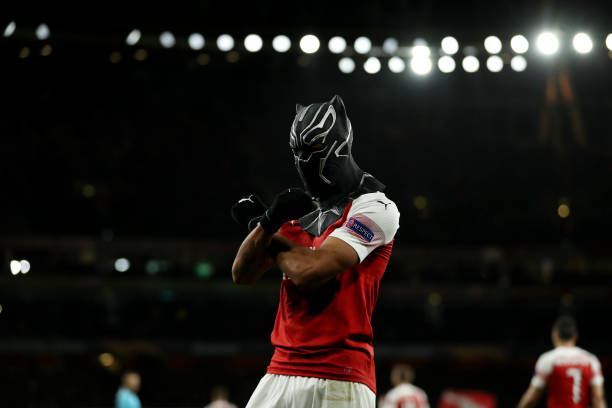 Pierre-Emerick Aubameyang joined Arsenal in the 2018 January transfer window and the Gabon striker has been very impressive for the North Londoners this season because he is currently their top scorer.

Pierre-Emerick Aubameyang missed a penalty in the North London Derby about two weeks ago but he however received forgiveness from the Arsenal fans after he scored another penalty in their 2-0 win over Manchester United. Aubameyang had a poor performance in Arsenal’s first leg of their UEFA Europa League round of 16 tie with Rennes but he once again redeemed himself in the second leg by scoring a brace.

One of the main talking points of Arsenal’s 3-0 win over Rennes on Thursday was that Aubameyang finally celebrated with a mask for the first time since he arrived at the Emirates Stadium. Aubameyang used a Spiderman and Batman mask in his time at Borussia Dortmund but he however this time used a Black Panther mask. The Gabon international was asked why he used that mask and this is what he had to say;

Pierre-Emerick Aubameyang is one of the best strikers in the Premier League but his main problem this season has been that he is too wasteful because he would have now had about 20 league goals by now. The Gabon international was asked about this and he however avoided the question, and said that he’s happy for Ainsley Maitland-Niles who also scored vs Rennes.

“Yeah I missed a few tonight. But I’m really happy for Ainsley tonight because Arsenal has to be proud of having young players like this coming through their youth teams, coming here and then playing so well. We are all so happy.” said Aubameyang.