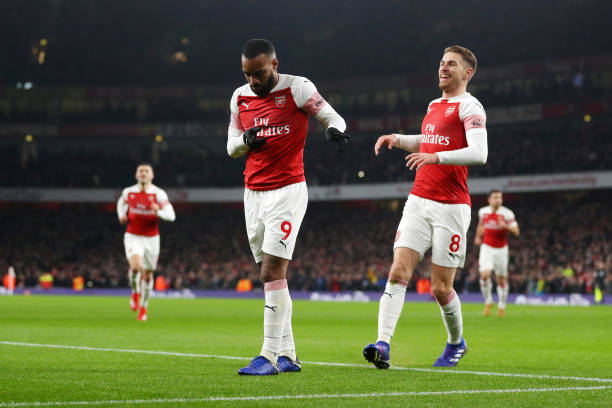 Arsenal will today battle for the three points with Tottenham Hotspur at the Wembley Stadium and the gooners will be hoping that Unai Emery fields the right lineup because they really need this win. So let us take a look at the predicted Arsenal lineup to face Tottenham Hotspur this afternoon that will probably see Lacazette and Ramsey start this game.

It’s very clear how Unai Emery let’s Bernd Leno play in the Premier League while Petr Cech plays in the other competitions. So the German shot stopper will be in the starting eleven that faces Tottenham Hotspur. The gunners will be hoping that he’s at his best in this North London Derby.

Unai Emery used a back three vs Bournemouth on Wednesday but the coach could use four at the back in the North London Derby because the gunners are more defensively solid when using that. So Arsenal’s two centre backs could be Sokratis and Koscielny since the club has confirmed that he’s fit to play while Stephan Lichtsteiner and Sead Kolasinac play as full backs.

Granit Xhaka was rested on Wednesday when the gunners welcomed Bournemouth at the Emirates Stadium but he will this Saturday be paired with Lucas Torreira who scored against Spurs in December. These two will be linking the defence to the attack.

Henrikh Mkhitaryan was superb in Arsenal’s 5-1 win over Bournemouth so he will be in the starting eleven and will be deployed on the flanks while Alex Iwobi covers the opposite side. So basically, Iwobi and Mkhitaryan will be Arsenal’s wingers while Aaron Ramsey plays as a Central Attacking Midfielder (CAM).

Aubameyang started as a solo striker on Wednesday but he could however be benched in the North London Derby so that Lacazette can start since the Frenchman won’t take part in the UEFA Europa League matches vs Rennes.