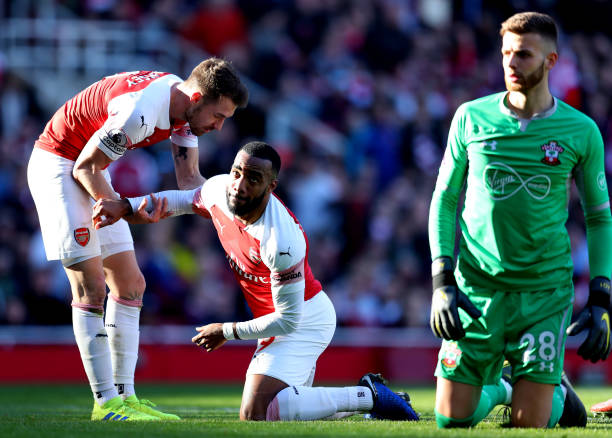 ( Ramsey and Lacazette / Photo via Getty )

Manchester United will today make a visit to the Emirates Stadium to face Arsenal who just got defeated by Rennes on Thursday. The gunners will be without Lucas Torreira who got a red card in the North London Derby and Bellerin, Holding and Welbeck are all not available because they are still on the sidelines. So let’s take a look at the expected lineup with all eyes on Aaron Ramsey and Alexandre Lacazette.

Bernd Leno will be in the starting eleven because he has been incredible in the last few matches. He is currently Unai Emery’s first choice goalkeeper.

Many people expect Unai Emery to revert back to a back three but him starting a back four in the North London Derby shows that he is happy with that system. Playing Mustafi as a right back hasn’t been successful so Emery could today play a real full back. Sead Kolasinac did not start on Sunday but they will need his speed against Manchester United. So Arsenal’s back four will consist of Lichtsteiner, Koscielny, Sokratis and Kolasinac.

Lucas Torreira is out for three weeks so Matteo Guendouzi will be paired with Granit Xhaka in the central midfield. It will be interesting how Guendouzi fairs against the Manchester United midfielders.

Aaron Ramsey usually starts as a no.10 in matches against the big six sides and he will definitely start today’s match in the same position. Alex Iwobi and Henrikh Mkhitaryan have been impressive in the last few weeks so they will start as wingers.

Aubameyang has lost his confidence after missing a penalty in the North London Derby so Lacazette will obviously start ahead of him.

Unai Emery receives advice on how to defeat Manchester United