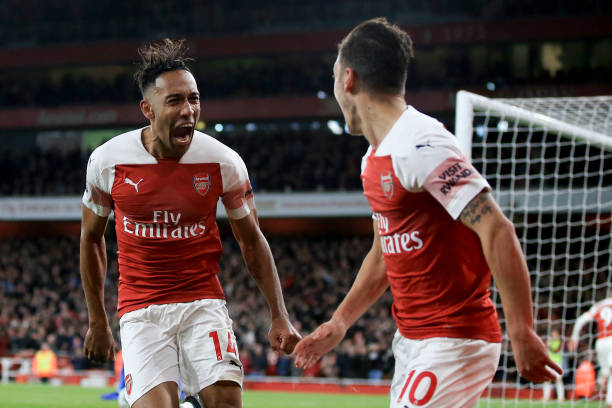 Arsenal will tomorrow welcome Rennes at the Emirates Stadium and it is going to be an important match because they will need to score 3+ goals and make sure they don’t concede. Aubameyang was assured of being in the starting eleven that faces Rennes but Lacazette’s ban has been reduced and he will be available for this match. So let’s take a look at why Unai Emery could bench both Aubameyang and Mesut Ozil in tomorrow’s match.

It is a fact that Arsenal is outstanding in its home matches but the circumstances will be different this time because they will need to score two goals and make sure they don’t concede against a team that has pacy attackers that will give the North Londoners a hard time. Arsenal boss Unai Emery will need balance in his squad tomorrow because he will be hoping that his players don’t make the same mistake that led to them conceding the third goal in France last week.

So who will Unai Emery sacrifice for balance in the squad? It will probably be Mesut Ozil and Pierre-Emerick Aubameyang because he can’t start them all as he did in the Manchester United game because this will make their midfield vulnerable as seen in the first leg of the match against Rennes. Lucas Torreira will return to the starting squad and will definitely be paired with Granit Xhaka while Ramsey starts ahead of Ozil because of his incredible work rate.

Mkhitaryan did not take part in the Manchester United match because of a slight injury but he will however return this Thursday so the Armenian international and Alex Iwobi will be on the flanks while Lacazette starts as a solo striker. So Emery will be hoping that Mesut Ozil and Pierre-Emerick Aubameyang could come in as super substitutes if the starting lineup fails to get the job done.

Arsenal Vs Rennes: Two players that will make a difference