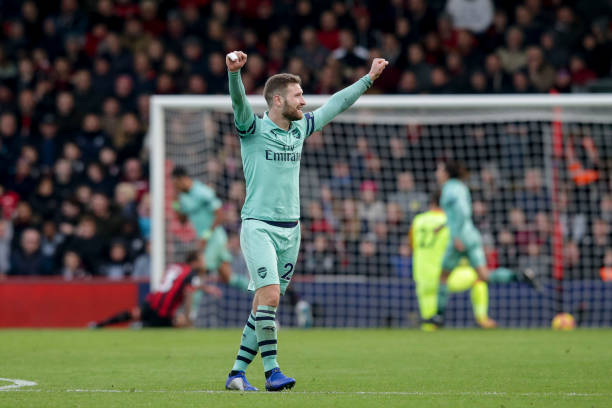 Arsenal signed Shkodran Mustafi from Valencia for £35million in the 2016 summer transfer window and he impressed the fans right away by being unbeaten in his first 17 matches at the North London club but he has in the last two years been poor hence receiving a lot of criticism from the gooners.

Arsenal fans want Unai Emery to sell Shkodran Mustafi in the summer transfer window but here are three reasons why the German international will not leave the club despite being one of the most ‘hated’ players at the Emirates Stadium right now.

Well even though the football supporters might take the age of the players for guaranteed but it is a huge factor that clubs consider when signing players or giving them new deals. Shkodran Mustafi is just 26 years old and that means that the gunners could easily use him for the next five years without worrying about the need for a new centre back to replace him.

Business wise, keeping Shkodran Mustafi is very important because Laurent Koscielny is 33 years old ( Almost worn out ) and Sokratis Papastathopoulos is 30 for now. These two won’t stay at Arsenal for more than three years because they will have got old but Mustafi will by then be just 29 years old. So Mustafi’s age could save him from being axed by Unai Emery.

SHKODRAN MUSTAFI IS A VERSATILE DEFENDER

Shkodran Mustafi is a centre back but he can also play in the right back position if needed and that’s something that both Sokratis and Koscielny can’t do. Since Stephan Lichtsteiner and Carl Jenkinson will leave Arsenal in the summer transfer window, keeping Mustafi will be logical since Bellerin is out until October, so the World Cup winner can be playing as a right back when Ainsley Maitland-Niles isn’t available next season.

Shkodran Mustafi makes many mistakes in almost all matches that he starts and Arsenal’s head coach Unai Emery must also be seeing them, and shaking his head thinking that why can’t I sell him and get a better centre back? Well if the reports are to be believed, The gunners will have a very tight budget with an estimate of £45million to spend in the Summer transfer window. So letting Shkodran Mustafi go would be a too expensive mistake.

If Unai Emery sells Shokdran Mustafi when he is on tight budget in the summer, he would then be forced to buy other centre backs who could possibly be worse than him (Mustafi).

Report: Impressing stats that you didn’t know about Arsenal’s Aubameyang

Report: Unai Emery finds a way to determine who starts on Aubameyang and Lacazette