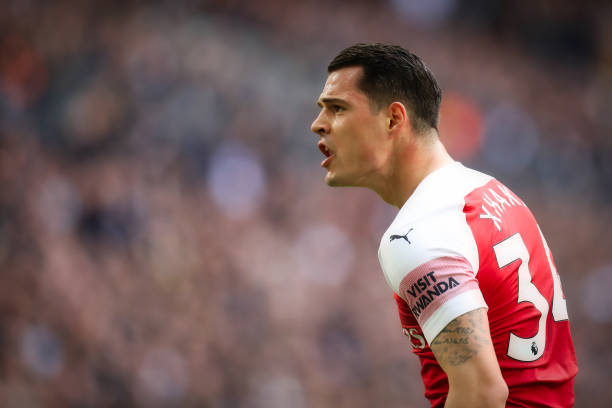 Arsenal midfielder Granit Xhaka got injured while he was on international duty for Switzerland’s national football team and he recently posted on his social media accounts that he has returned to Arsenal to receive treatment.

Arsenal will on Monday welcome Newcastle United at the Emirates Stadium and the gooners will be hoping that he recovers before this match because he has been on form in the last five matches. Arsenal head coach Unai Emery faced the media today for his pre-match press conference and he has revealed that the Swiss international was not in the squad that trained today at the London Colney but the doctors say that he will be fit for the game vs Newcastle United.

“Xhaka also rested today, we’re going to wait until tomorrow and Sunday but the first previews from the doctor is that he can progress to be ready for Monday.” Unai Emery told Football.London.

The Arsenal fans will be hoping that it is nothing serious because losing Granit Xhaka to an injury now would be a big blow because he is on form and Lucas Torreira is no longer at his best, and still suspended in the Premier League. Xhaka usually starts all matches under Unai Emery because the coach believes that the midfielder is among the players that have impressed him.

The Arsenal fans will be happy that Granit Xhaka could be available for their game vs Newcastle United on Monday.

Xhaka sends a message to Arsenal fans amid injury fears