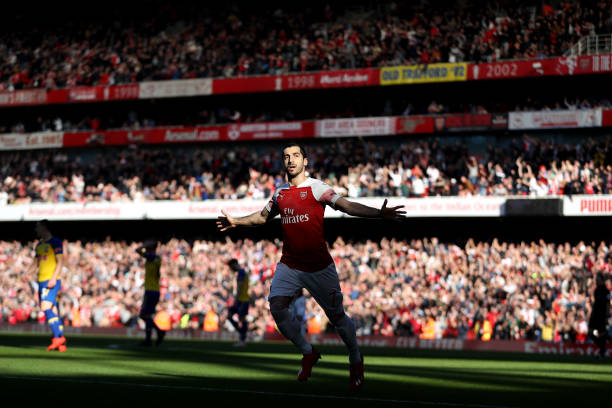 Henrikh Mkhitaryan arrived at the Emirates Stadium in a swap deal in the 2018 January transfer window and his first few months with the North Londoners weren’t that great because him and Aubameyang were not able to get Arsenal, UEFA Champions League football.

Henrikh Mkhitaryan has however been incredible under Unai Emery this season because he has been able to score six goals as well as making four assists which is pretty impressive considering that he did get injured for about two months. Henrikh Mkhitaryan scored in Arsenal’s matches vs Southampton and Bournemouth, and even though the gunners made a draw in the North London Derby, the Armenian international was very impressive in this game.

Arsenal head coach Unai Emery likes players that can help in defensive and attacking moments because he wants his squad to work as a team especially when defending and Henrikh Mkhitaryan shown that he matches those qualities which the coach requires. Henrikh Mkhitaryan helped the defence of the gunners numerous times in the North London Derby and Unai Emery has revealed why he likes the former Manchester United star.

“He can do it, because physically he has a big [capacity].He can get to the two boxes, defensively and offensively.” Arsenal head coach Unai Emery told Arsenal.comArsenal.com.

“After that, I think he also has the quality to help us in our style of play and for example, he usually can play 90 minutes with being consistent in his work. Another player, maybe, cannot do that with this big intensity.”

Lacazette speaks out on what Unai Emery wants from them

Unai Emery speaks out on making a draw with Tottenham Hotspur