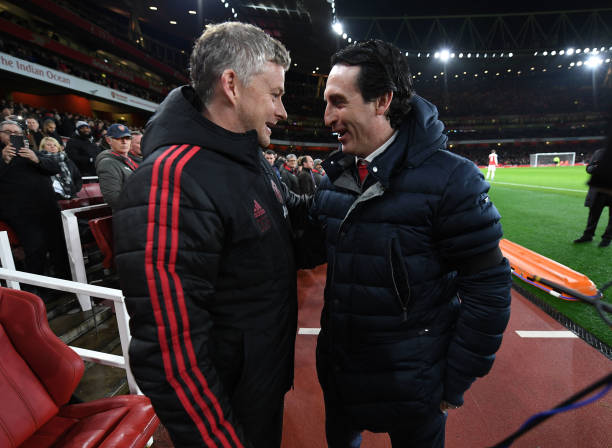 Arsenal has now went back to the Premier League top four after defeating Ole Gunnar Solskjær’s men who came into this match after eliminating Paris Saint Germain from the UEFA Champions League. Goals from Pierre-Emerick Aubameyang and Granit Xhaka have today given Unai Emery an important two nil win over one of their oldest rivals.

Arsenal boss Unai Emery selected an attacking heavy squad because he did not want to go too defensive at home when they have many attacking players and Lucas Torreira’s absence played a huge part in him starting both of his strikers ( Aubameyang and Lacazette ) and the central attacking midfielders, ( Ramsey and Ozil ). This worked well because the gunners looked very calm in their attack with their quick counter attacking moves.

Arsenal got their first goal after Alexandre Lacazette passed the ball to Granit Xhaka who sent in a powerful shot which tricked David De Gea hence going into the back of the net. The gunners now gained momentum and started attacking Manchester United even though it had got some good chances to score before they got their goal, the gunners were however stopped by the linesman many times for being offside even though they were sometimes onside.

Manchester United also pushed for an equaliser and looked like scoring every time they went forward but the gunners looked solid in their penalty box but were getting beaten at the flanks. Lukaku almost rounded off Bernd Leno but the German goalkeeper followed him until he tinked it away and the Manchester United striker tried to shoot the ball in but it went wide. The first half ended 1-0 in favour of the gunners with both of the teams getting chances to score but Arsenal were the only one to put the ball into the back of the net.

The first minutes of the second half were all Manchester United as they pressed and attacked the gunners vigorously while the home side resorted to counter attacking their opponents. Lacazette was later fouled in the Manchester United box.

Pierre-Emerick Aubameyang was surprisingly let to take the penalty kick even though he missed one in the North London Derby a week ago, the gunners were now 2-0 up. Unai Emery’s men now remained at the back while Ole Gunnar Solskjær’s boys continued putting pressure on them, hoping that they would make a mistake.

The gunners made couple of substitutes in the last 20 minutes of the game; Alex Iwobi first replaced Ozil, Suarez went in for Aubameyang and Lacazette got replaced by Nketiah. The match ended 2-0 in favour of the North Londoners.

Aubameyang fails to give Arsenal win over Tottenham Hotspur