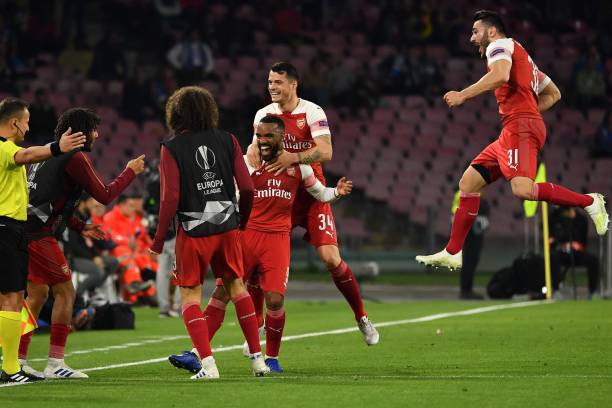 ( Napoli Vs Arsenal / Photo via Getty )

Arsenal has qualified for the UEFA Europa League semi finals after beating Napoli 3-0 on aggregate thanks to an incredible performance from Unai Emery’s men in the 180 minutes played at the Emirates Stadium and San Paolo Stadium.

The gunners defeated Napoli at the Emirates Stadium in the first leg with Aaron Ramsey and an own goal from Kalidou Koulibaly giving them a 2 nil win and Alexandre Lacazette has on Thursday finished the job by scoring a free kick goal in the first half to give the gunners a much deserved win in Naples. Arsenal came into this match with immerse confidence since they had a two goal advantage and just looked for an away goal to finish the tie.

Arsenal midfielder Aaron Ramsey got injured in the first half and the gooners will be hoping that this isn’t the last time that they see him in their kit, Henrikh Mkhitaryan came in and played as Arsenal’s central attacking midfielder. Lacazette opened the scoring for the gunners via a free kick moments later and this goal saw the Napoli players lose confidence despite having got some glorious chances before Arsenal went on the score sheet.

Arsenal played a high line and pressed Napoli which led to them losing the ball numerous times but the gunners still failed to get a second, Aubameyang missed a sitter at the start of the second half despite having been close to the Napoli goal but his shot was saved. Mohamed Elneny later got subbed in for Granit Xhaka who was removed since he was on a yellow card ( It was important to take him out so that he doesn’t miss the semi finals ).

Arsenal’s goal scorer Alexandre Lacazette also got replaced by Alex Iwobi who came in with fresh legs to stretch the Napoli defenders who were anxious to get the ball forward. Arsenal resorted to defending in the last 15 minutes and they surprisingly didn’t concede. So Unai Emery’s Arsenal is now in the UEFA Europa League semi finals and will face Valencia with the first leg being played at the Emirates Stadium.