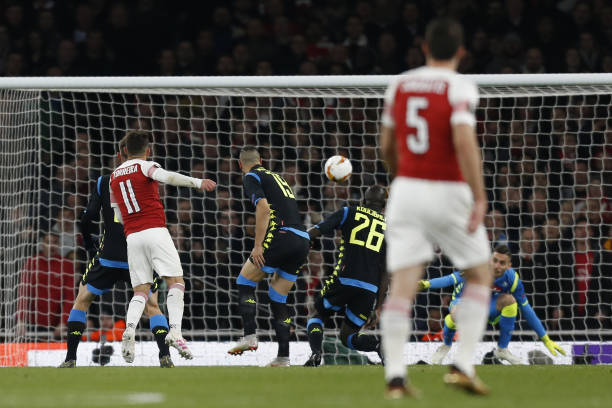 ( Arsenal Vs Napoli / Photo via Getty )

Arsenal will tomorrow face Napoli in Naples to conclude their UEFA Europa League quarter-final tie against the Italian side. Arsenal boss Unai Emery will be hoping that his side manages to get atleast one goal away from home or maybe go defensive to make sure that it ends 2 nil on aggregate thanks to their first leg win at the Emirates Stadium.

Arsenal went back to winning ways in the Premier League on Monday when they defeated Watford 1-0 and even though it wasn’t a convincing win since the Hornets were one man down but the North Londoners will still be confident ahead of this game since they are leading by two goals to nil on the aggregate. Napoli have also restored their confidence ahead of this match as they defeated Empoli in the Italian Serie A at the weekend with Kalidou Koulibaly scoring a brace.

Both Arsenal and Napoli are favourites to win the UEFA Europa League this season and everyone is keeping an eye on who wins this tie because many believe that whoever does this could go on to win the competition in Baku. Arsenal has this season been poor away from home and this is why no-one believes that the gunners have finished the job despite winning by two goals in the first leg, so this match would be a perfect opportunity to make a statement.

Arsenal has already made two come backs in the UEFA Europa League knock out stages this season but they will be hoping that this doesn’t happen to them too as they are this time leading on aggregate and Napoli do have the quality to turn this around since it has the likes of Arkadiusz Milik, Mertens and Kalidou Koulibaly who is a defensive rock.