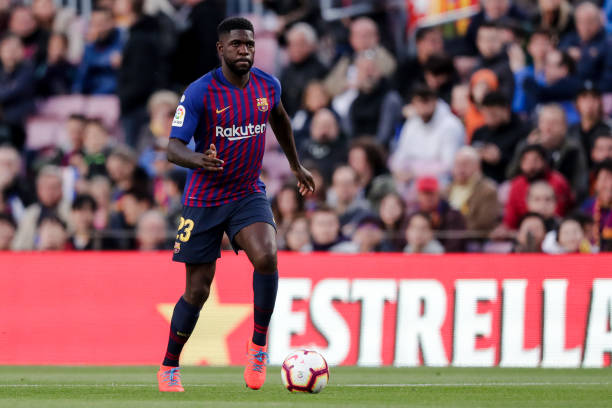 It is well understood by now that Arsenal is interested in Barcelona centre back Samuel Umtiti who has struggled with injuries in the last 12 months. Multiple reports from Spain and England claim that Arsenal are hopeful that they can sign Samuel Umtiti since the Spanish giants will need to get funds to make a mega bid to sign Ajax’s Matthijs de Ligt.

Matthijs de Ligt has been very impressive this season and it’s clear that he is bound to end at Barcelona in the summer transfer window and this transfer deal will be key in making Samuel Umtiti request for a move away from the Catalan club to get more game time. A report by MSN claims that Arsenal will not only be the Premier League that will be interested in Samuel Umtiti in the summer transfer window.

Manchester United have also been defensively poor this season and it seems like they will try to snatch Samuel Umtiti from Arsenal in the summer if they don’t get their number one centre back transfer target who is Napoli’s Kalidou Koulibaly. The gunners cannot financially compete with Manchester United but they would be hoping that Samuel Umtiti’s long-term friendship with Alexandre Lacazette would ease the negotiations to bring him to the Emirates Stadium.

Arsenal has this season been let down by its defenders and the fans are hoping that the club can address this in this upcoming transfer window because they can’t challenge for titles when they easily concede in most matches.