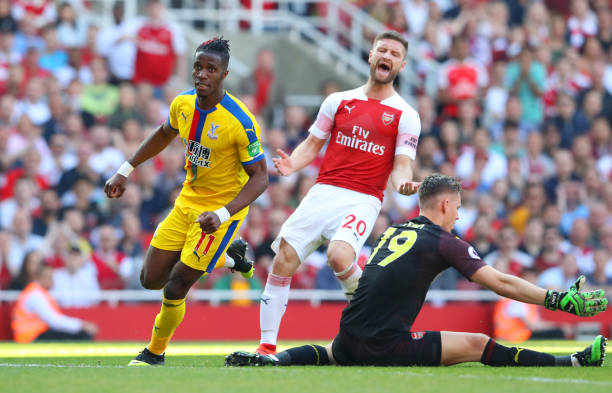 Arsenal welcomed Crystal Palace at the Emirates Stadium and lost the game 2-3 because Unai Emery undermined them and started with a poor lineup hence his side getting outclassed in the first half and later in the second half. The Arsenal fans were hoping that they would win today to leapfrog Tottenham Hotspur on the Premier League table but they didn’t only lose but also failed to accomplish an amazing record.

The gunners were caught a sleep in the first half as un marked Benteke got a free header and headed past Bernd Leno who had a slight touch on the ball.  This goal can’t be attributed to an individual player but the second one was all because of Shkodran Mustafi as he left the ball and Wilfred Zaha ran past him and scored.

The reason Shkodran Mustafi is getting a lot of criticism is because the gunners looked ready to win it when it was 1-1 and Unai Emery can also partially take the blame of this loss since he picked a weak side. Sadly for Unai Emery, had he won today; He was going to make an Arsenal record which would atleast make everyone to respect him more as the perfect candidate to take the gunners forward.

“Arsenal have won their last 10 home Premier League games – they have never won 11 in a row at home within a single top-flight season before.”

That up there is a record that Unai Emery and his boys would have broken if they defeated 12th placed Crystal Palace this evening but Shkodran Mustafi and poor selection from the boss cost them the three valuable points and a chance to make this astonishing record.