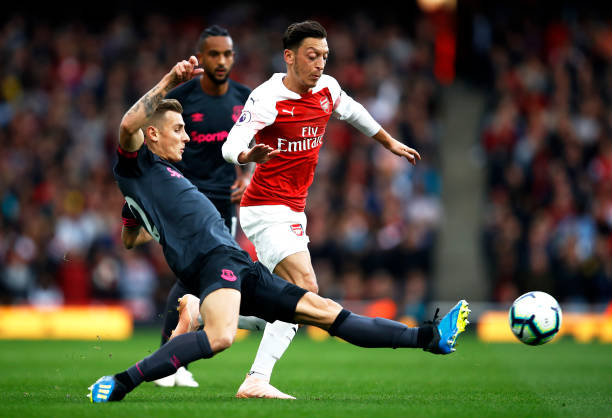 ( Arsenal Vs Everton / Photo via Getty )

The Premier League is back this weekend and Arsenal will face Everton who have won their last two matches. The gunners will be hoping to increase their chances of a getting a top four finish by collecting all the three points from Everton at its home ground.

Arsenal come into this match after winning their last three matches vs Rennes, Manchester United and Newcastle United and Unai Emery will be hoping that they can continue this winning run since these matches will determine whether the fans and board can call this a successful first season in English football for the former Paris Saint Germain boss.

Even though Everton aren’t having a season that they can be proud of but the gunners will come into this match with caution because the Toffees have shown that they can a formidable side when they are playing at Goodison Park because they managed to beat Chelsea 2-0 in March before the international break. Arsenal will not play any top six side in its last matches of the season but their rivals are confident that the North Londoners will slip up in those games because Unai Emery’s men have been awful when playing away from home so a win over Everton would be a good start.

Everton still have a chance of finishing the season in the seventh position if they can go on a winning run because they are just four points behind Wolves, so they will put on a big fight against Arsenal on Sunday. Arsenal will also be determined to get all the three points because a win will see them go into the third position on the Premier League table.

Arsenal boss Unai Emery said that Granit Xhaka and Laurent Koscielny did not train because they are not fully fit, this doesn’t confirm that they will miss the game but they will however be assessed before Unai Emery selects the squad that travels to Liverpool. Rob Holding (knee injury), Danny Welbeck (ankle injury) and Hector Bellerin (knee injury) are still on the sidelines.

Everton will be without Yerry Mina who is still on the sidelines because of a thigh injury but they have however received good news of their first choice goalkeeper Jordan Pickford being fit for this match.