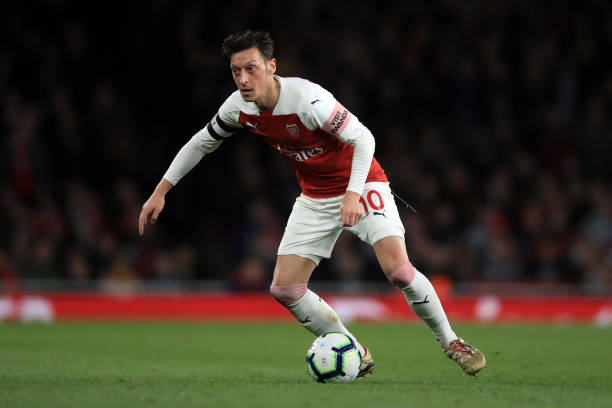 Aaron Ramsey and Mesut Ozil were both in the Arsenal squad that defeated Newcastle United 2-0 at the Emirates Stadium and the fans will be hoping to see more from them until the end of the season. Mesut Ozil and Aaron Ramsey starting together has been rare this season but they have both started in the last two matches.

Mesut Ozil has this season been criticized for failing to adjust to the demands of the new Arsenal boss but it seems like he has finally get the hang of it as him starting three matches in a row is a sign that Unai Emery trusts him more now. Mesut Ozil had an incredible performance against Newcastle United and he has been given the man of the match award since the stats show that he was outstanding.

Mesut Ozil has sent a message to the Arsenal fans they leapfroged Tottenham Hotspur to go into the third position on the Premier League table.

“Up to 3rd! We are definitely on the right track, YaGunnersYa Home Victory”

Aaron Ramsey will leave Arsenal at the end of this season but he has been professional and is giving 100% to the North London club that did not give him the deal that he requested. The Wales international was given the captain’s arm band last night and he first scored via a corner but that goal was however disallowed because Sokratis had fouled a Newcastle United player.

Aaron Ramsey then later finally went on the score sheet after he fired in a low shot to give the gunners the lead in the first half but he however got injured in the second half. The soon to be Juventus midfielder sent a message to the Arsenal fans saying;

Great atmosphere at the Emirates tonight. Good to get on the score sheet and even better to get the 3 points ⚽️ pic.twitter.com/cVXtkNV0cy

“Great atmosphere at the Emirates tonight. Good to get on the score sheet and even better to get the 3 points.”