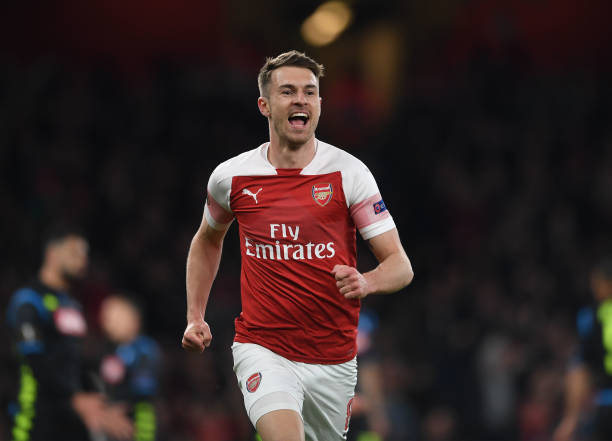 Aaron Ramsey will join Juventus at the end of this season after he failed to agree on a new deal with the North Londoners and Unai Emery now has a huge task of replacing him now as the Welshman will be missed at the Emirates Stadium.

Aaron Ramsey has in the last few months shown the Arsenal fans what they will miss as he has been a very important player in the squad that has helped them to get important victories over Napoli and Manchester United. Arsenal boss Unai Emery claimed that he wanted to build his team around Aaron Ramsey at the start of the season but it’s surprising how things have changed as the midfielder will now leave the North Londoners on a free transfer in the summer.

Arsenal head coach Unai Emery has said that the gunners have two options in getting a replacement for Aaron Ramsey; he says that they can get a player internally or outside as a replacement for the former Cardiff City midfielder.

“We could replace him (Ramsey) with a player from outside, or with a player who is already here who can grow like he did himself.” Unai Emery told Sky Sports.

Aaron Ramsey has been at Arsenal for a decade now but he has finally called it quits as he says that he wants to start a new adventure with Juventus in the Serie A. The Arsenal fans will always remember him for helping them win three FA Cups in the last decade.