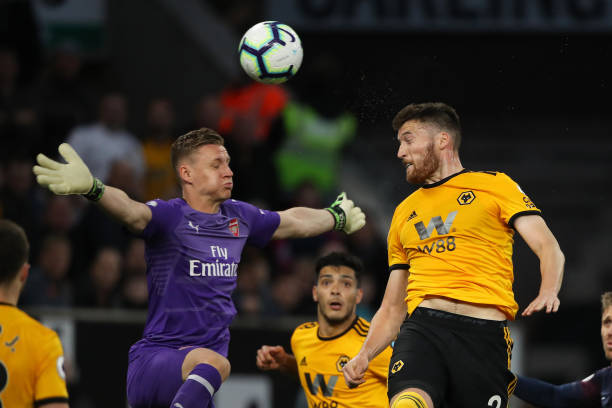 ( Wolves Vs Arsenal / Photo via Getty )

Arsenal faced Wolves last night and they got beaten by the home side which once again showed that it is a giant killer as it has beaten most of the top six sides including the gunners. The gunners came into this match hoping to get all the three points so that they can go back into the Premier League top four but Wolves were tough to defeat as they embarrassed Unai Emery’s men.

Arsenal boss Unai Emery used his best starting lineup with Aubameyang and Ramsey the only ones missing but Wolves packed the bus as they have done in all their matches against top six sides. Arsenal failed to penetrate the back line of Wolves because they are very tight at the back and well composed to frustrate clubs that try to keep possession.

Wolves broke out on a quick counter attack and Nacho Monreal fouled Jonny hence the home side getting a free kick on the edge of the penalty box. Wolves’ Neves made no mistake but send the ball into the back of the net because the Arsenal players set up the wall poorly hence him getting the chance to open the scoring.

Arsenal now went under pressure but Alexandre Lacazette got a good chance to score but he sent the ball flying high and things changed instantly in the next couple of minutes as Doherty scored for Wolves their second goal of the day. Just as the first half was about to end, the gunners lost possession of the ball and Wolves broke out on a counter attack and Jota scored their third before halftime.

Arsenal still failed to break down Wolves in the second half as they kept passing sideways and backwards until they lost the ball. Unai Emery removed Torreira to bring in Guendouzi and Mkhitaryan to bring in Kolasinac. These two didn’t change much either as Wolves stayed very composed at the back and Nketiah was introduced in the last minutes of the game, and he looked very lively. The gunners managed to pull one goal back through Sokratis Papastathopoulos.

So Arsenal boss Unai Emery and his players have yet again failed to get things right away from home.