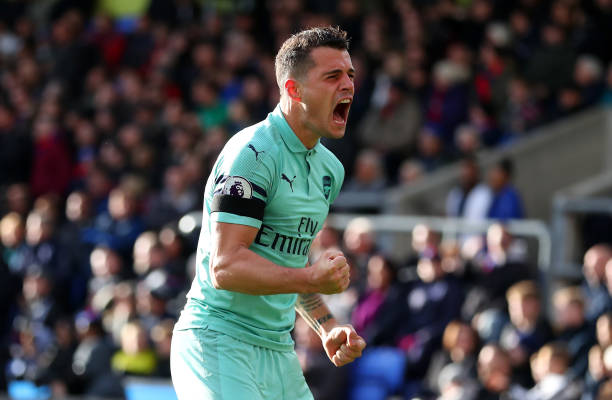 Arsenal have been very poor away from home this season and this has massively affected them because they now find themselves in the fifth position on the Premier League table after losing two consecutive away matches. Granit Xhaka says that it is difficult for them to also explain why they are so poor away from home.

The gunners have got only 12 points away from home this season and that’s worrying for a team that wants to go back into the UEFA Champions League because they’ll need to win to collect a lot of points if they want a Premier League top four finish this season since three clubs are battling for the third and fourth positions.

Granit Xhaka was in the Arsenal starting eleven that lost to Wolverhampton and Leicester City consecutively and he was hugely disappointed in himself after they got beaten at the King Power Stadium. The Swiss midfielder tried to explain why the gunners are poor away from home.

“It is difficult to explain why we don’t play like at home and why we don’t take the points.” Granit Xhaka told Sky Sports.

“I said this last week. It is a different game away and at home. You can’t play like at home. You have to win the duels, run more than the opponents because the fans are in front of them.”

“All the teams in the Premier League can play football and they can fight. If you don’t take the fight against them it looks like (Sunday).”

Arsenal have only lost twice at the Emirates Stadium this season and they would have been comfortably in the Premier League top four had they put on great performances in their away matches. Arsenal’s last away win was at the Vicarage Road and the gunners were still dominated in that game yet Watford were one man down.

Impressive stat that proves that Lacazette is important to Arsenal