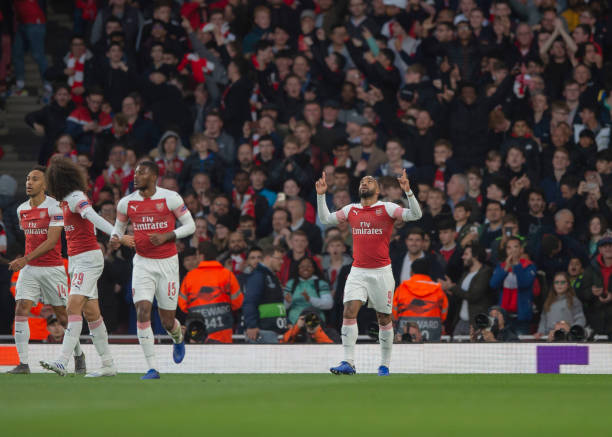 ( Arsenal Vs Valencia / Photo via Getty )

Arsenal has today beaten Valencia 3-1 thanks to goals from Alexandre Lacazette (2) and Pierre-Emerick Aubameyang. The gunners started off the match poorly and fell into the trap of Valencia who were ready to defend until the final whistle, the visitors opened the scoring through Diakhaby due to poor defending from Unai Emery’s men.

It didn’t take long for the gunners to get back on track as a fantastic move by Arsenal saw Lacazette split the Valencia defence with an impressive pass and Aubameyang held onto the ball and rolled it towards Lacazette who equalised for the home side in the 18th minute. The gunners now tried to be calm on the ball and this paid off as Granit Xhaka sent a beautiful cross in the Valencia box and Lacazette headed home to give Arsenal the lead.

LONDON, ENGLAND – MAY 02: Alexandre Lacazette of Arsenal (9) celebrates as he scores his team’s first goal with Pierre-Emerick Aubameyang during the UEFA Europa League Semi Final First Leg match between Arsenal and Valencia at Emirates Stadium on May 02, 2019 in London, England. (Photo by Shaun Botterill/Getty Images)

Arsenal started off the second half on a positive note and got a couple of chances but couldn’t finish them. Emery later removed Matteo Guendouzi to bring in Lucas Torreira and the Uruguayan international had an immerse impact as the gunners now looked better in the midfield. Petr Cech saved Arsenal after a great move by Valencia split their defence but he was however able to make a vital save. Lacazette got two goal scoring chances but surprisingly missed them. Henrikh Mkhitaryan came in for Mesut Ozil later on in the game.

Laurent Koscielny seemed uneasy throughout the second half but he however tried to continue playing with this injury until the final minutes of the game, he got replaced by Nacho Monreal. Henrikh Mkhitaryan’s introduced was very good because he caused the Valencia defence many problems. The gunners finally got their third goal of the day through Aubameyang who finished off a great cross by Sead Kolasinac. The match ended 3-1 and Unai Emery will be happy to go home with a two goal advantage.