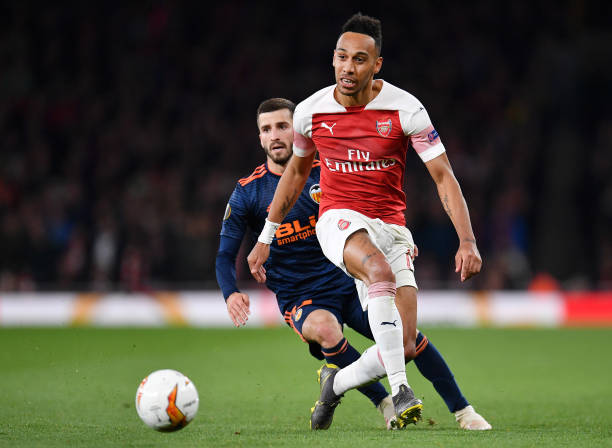 The gunners defeated Valencia 3-1 last night at the Emirates Stadium thanks to goals from Aubameyang and Alexandre Lacazette. Arsenal came into this match after losing their last three matches in the Premier League and winning this game kept their Champions League hopes alive because winning this competition earns you automatic qualification.

Arsenal fans felt scared in the 11th minute after Valencia scored the first goal of the day but Aubameyang combined well with Lacazette to equalise for the gunners after a few minutes. Lacazette then later gave Arsenal the lead in the 25th minute, this was exceptional to see because the gunners failed to recover in their last three matches which they ended up losing but they however stepped up in this one.

Pierre-Emerick Aubameyang finished off the job in the 90th minute when he scored a beautiful goal which saw the North Londoners win the first leg 3-1 meaning they will go to Spain with a two goal advantage. Aubameyang says that they were very nervous in the first minutes of the game because of their last three matches.

“We started the game a bit nervous because we lost the last three games, and that’s normal because we’re human, but after that we had a good reaction.” Aubameyang told Arsenal’s official website.

“We have a lot quality in this group and we can get to the final, but we know the next game will be difficult. If we do the same ingredients there, we will go through.”

It is quite understandable that the Arsenal players were a bit nervous because losing three matches in a row will definitely make a team to be emotionally broken. The Arsenal players showed great fighting spirit by coming back from one goal down to win the match 3-1.