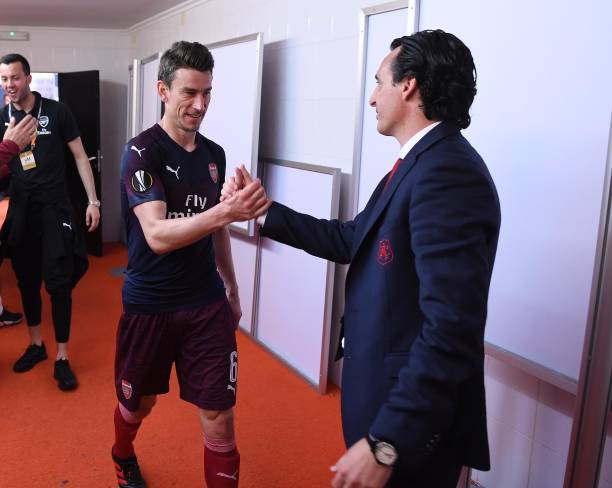 The gunners will have a big defensive overhaul in this summer transfer window because Unai Emery has identified players that won’t suit his playing style and those that are old. Most of the Arsenal players have been put on the market and it’s surprising because that didn’t always happen in the past under the past management. Stephan Lichtsteiner has already left because the club did not extend his one year contract.

Laurent Koscielny has been a fantastic player for Arsenal and was even made captain last season but his time is up and it looks like the North Londoners will sell him in this transfer window to avoid losing him for free next year. So let’s take a look at the replacement which Unai Emery has picked to fill in the shoes of the Frenchman. Current reports claim that Laurent Koscielny could be either make a move to a Turkish or French club this summer after he told the gunners that he wants a new challenge.

William Saliba of Saint Etienne during the Ligue 1 match between Monaco and Saint Etienne at Louis II Stadium on May 5, 2019 in Monaco, Monaco. (Photo by Pascal Della Zuana/Icon Sport via Getty Images)

William Saliba is an 18-year-old centre back who plays for  Saint-Étienne in the French Ligue one and he has in the last season been incredible hence attracting a lot of interest from many top European clubs but the gunners are however the ones on the front foot to sign him according to Goal.com.

The young centre back is highly rated in France and is seen as the next big thing and some claim that he is playing style is similar to that of Real Madrid’s Varane. Arsenal head coach Unai Emery will be hoping that Saliba becomes a perfect replacement for Laurent Koscielny who will be leaving the Emirates Stadium this summer. William Saliba is a big asset for Saint-Étienne and it’s believed that the gunners will only be able to take him away from them if they can make a bid of atleast £25million. Saliba made 16 appearances in the French Ligue one last season despite just being 18 years old.

Report: Why Emery might not sell Mustafi in this summer transfer window