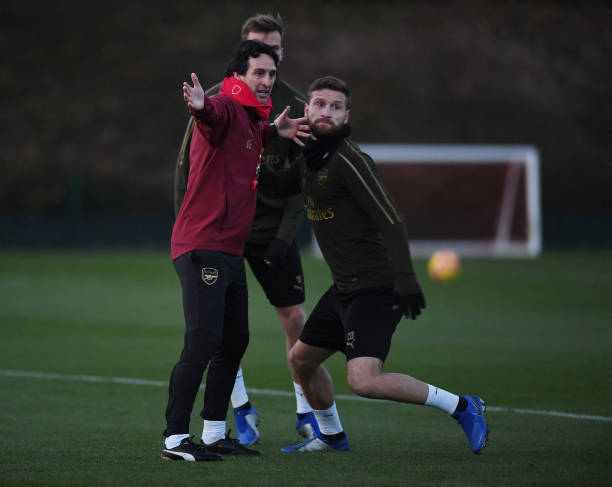 The gunners will be busy in this summer transfer window because they will be hoping to rebuild their squad and the Arsenal fans want Shkodran Mustafi to be the first player that gets sold since he has awful last season. We however take a look as to why Emery might consider keeping Mustafi for one more season.

Arsenal clearly need a new centre back in this summer transfer window but is it sensible to sell Shkodran Mustafi who is still a young player even though he is error prone? It might not because of some of the followings reasons. Arsenal’s current centre backs are; Mustafi, Koscielny, Sokratis, Mavropanos and Holding.

We all know Laurent Koscielny has lost his legs and can no longer last a full season since the Premier League is a high intensity league and most importantly he is 33 years old. Unai Emery might consider selling him this summer because he is now not at his best and was clearly worn out at the end of the season as seen in the last five matches.

LONDON, ENGLAND – APRIL 21: James McArthur of Crystal Palace is tackled by Konstantinos Mavropanos of Arsenal during the Premier League match between Arsenal FC and Crystal Palace at Emirates Stadium on April 21, 2019 in London, United Kingdom. (Photo by Clive Rose/Getty Images)

Mavropanos who is a fan favourite because of just one game in the 2017/18 season has been poor in the few cameos that he has had last season and will certainly be loaned out in this transfer window. It is really necessary for him as he needs minutes to get a good rhythm after battling an injury for months. This leaves Arsenal with only Holding, Mustafi and Sokratis.

Holding also has a long-term injury and we don’t know if he will be available at the start of the season or if he does come back in August, he might not be fully fit for weekly football. Shkodran Mustafi is error prone but he is a defender that is always available and isn’t injury prone, selling him will mean that the gunners need two defenders and so Unai Emery might decide to keep him for one more season as the gunners have a lot of priorities with a budget of just £45million.

Report on the player that Emery wants to replace Koscielny