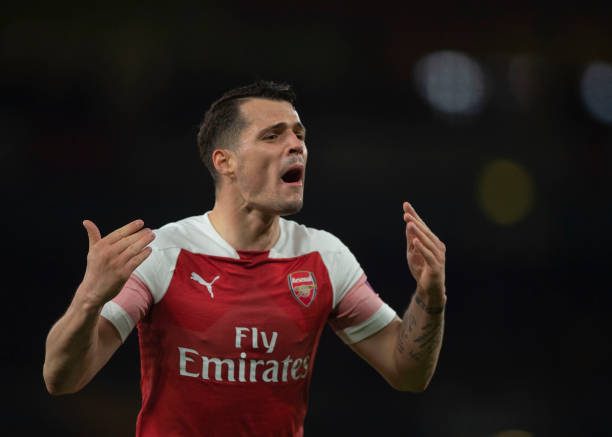 Arsenal’s 2018/19 campaign ended on 29st in May and the players have been released from the club to go and do international duty for their respective countries. Granit Xhaka was with Switzerland a few days ago and they played two matches in the UEFA Nations League.

There has been some reports in Italy which have claimed that Granit Xhaka is wanted by Inter Milan who are looking to build a strong team in this transfer window to make a title challenge in the upcoming season. The Arsenal fans have got excited because of these reports because they want the club to sell the Swiss international since he was error prone last season and some hold him accountable for their failure to get a top four finish because of the mistake that he made in Arsenal’s 1-1 draw with Brighton & Hove Albion.

Granit Xhaka has however confirmed that the reports linking him to Inter Milan aren’t true and this certainly could be true because he has already spoken about his desire to become Arsenal’s captain next season if Laurent Koscielny leaves the club.

“They’ve been writing newspapers, but nothing is true. They are just speculation and I do not have any contact with Inter club.” Granit Xhaka told GazetaOlle.

Arsenal’s head coach Unai Emery has always spoken highly of Granit Xhaka and the midfielder has never got dropped by Unai Emery despite him receiving a lot of hate from the fans. As it stands, it looks like Granit Xhaka will be staying at Arsenal for atleast the upcoming season.