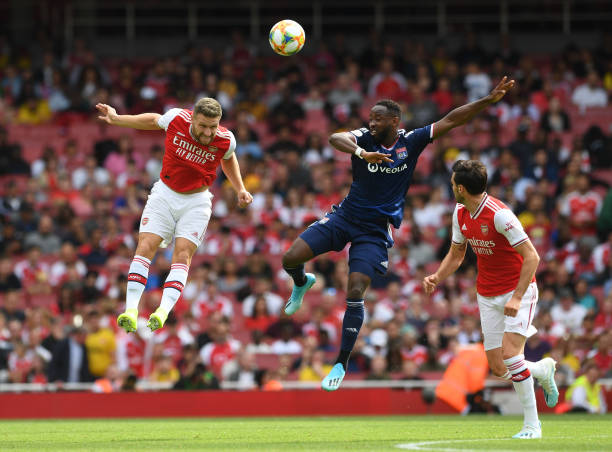 ( Arsenal Vs Lyon / Photo via Getty )

Arsenal faced Lyon today at the Emirates Stadium and lost the match 2-1 thanks to two great goals from Dembele. Even though the score clearly shows how Arsenal lost but they were however the better team as they created a number of goal scoring chances but missed most of them.

Arsenal started the match well but the fans were however sent into panic mode after Alexandre Lacazette got subbed off in the first minutes of the game because of an injury and Reiss Nelson replaced him. Reiss Nelson put on a great performance and this game should surely boost his confidence as he was poor in the previous pre-season matches.

Xhaka, Guendouzi and Willock were put in the Arsenal midfield by Unai Emery and they put on an incredible performance in the first half. Henrikh Mkhitaryan was great in the first half and was the one who set up Aubameyang’s goal in the 35th minute and the first half ended with the gunners leading by one goal to nil.

LONDON, ENGLAND – JULY 28: Joe Willock of Arsenal during the match between Arsenal and Olympique Lyonnais at Emirates Stadium on July 28, 2019 in London, England. (Photo by David Price/Arsenal FC via Getty Images)

Arsenal’s head coach Unai Emery decided to change his formation in the second half and brought on Nketiah in for Guendouzi and the gunners now started losing the midfield battle as Lyon had also put in its first team midfielders. Chambers and Sokratis were solid in the first half but they however put on a disastrous performance in the second half.

Ainsley Maitland-Niles once again showed that he can’t manage to play as a right back as he was beaten by Depay who sent in a cross to Dembele who got a free header up equalise for Lyon. The gunners brought in more youngsters including Martinelli and Dani Ceballos.

Martinelli scored for the gunners but his goal was however disallowed for being offside and Lyon then tore apart the Arsenal defence and Dembele got his second goal of the day even though it is debatable if it’s offside. So it’s all over and Unai Emery will be happy with his attackers but his defence is still lacking.