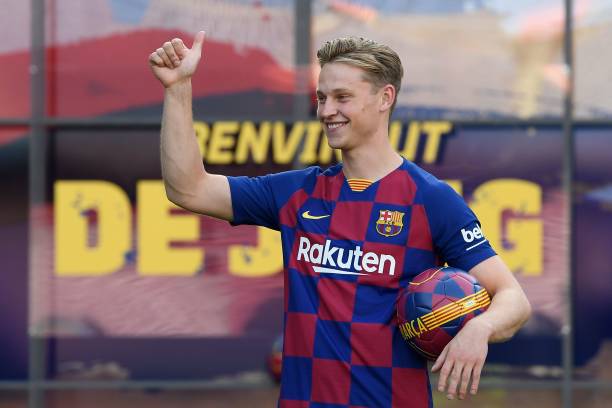 Arsenal is one of the most respected clubs in the world due to its incredible run from the 90’s to 2004 where they won the league title without losing any match. Some footballers have always hoped to play for Arsenal and most have opened up about it and Barcelona’s new signing Frenkie de Jong becomes the latest player to go on that list.

Frenkie de Jong is a talented midfielder and he was immerse last season as he helped Ajax win the Eredivisie title and was also an integral part of their UEFA Champions League run which saw them reach the semi finals only to lose to Tottenham Hotspur.

Arsenal has over the years been well-known for developing young players and they did make some remarkable signings from Ajax like Marc Overmars and Thomas Vermaelen in the past. Frenkie de Jong has made an interesting statement about how he never believed that he would straight up go to Barcelona because he was hoping to use what he calls the Marc Overmars route as how the Dutchman  arrived at Arsenal in 1997 and later joined Barça in 2000.

“I actually thought Arsenal was pretty beautiful in the past. In my mind I have had the following list for a long time: Ajax-Arsenal-Barcelona, ​​call it the Marc Overmars route.” Frenkie de Jong told Voetbal International.

“But yes, if you can go directly to Barcelona, then you are also right where you want to be. Faster than you ever dared to dream.”

Frenkie de Jong has however gotten his big move to an early age as Barcelona paid £65million to bring him to the Camp Nou.

Report: The possible truth about the Laurent Koscielny saga