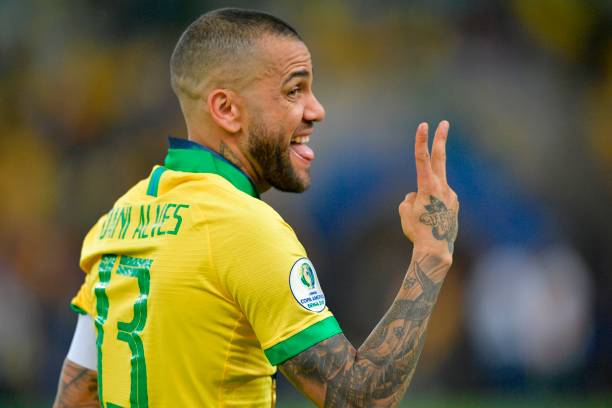 The gunners will have to wait until September until they get Hector Bellerin back and there isn’t any guarantee that he will be ready for constant football when he finally returns from this hectic knee injury. So Arsenal has reportedly went into the transfer market to sign a back up right back and the gunners are currently linked with Dani Alves.

Dani Alves has been at Paris Saint Germain since 2017 after having been signed by Unai Emery but he was however been released by the French club this summer after they failed to agree on a contract renewal. The gunners would probably not mind signing a free agent as Dani Alves for a year since they are on a tight budget and they did the same last season but it however didn’t work out as the Premier League proved to be too tough for Stephan Lichtsteiner.

Dani Alves has however proved that he is still an outstanding right back even at 36 years old and he has spoken about his future saying that he who signs him will have got a true champion.

“Now I’m free, but I still have a lot to accomplish in my career. The only thing that I can say is that the club that sign me will sign a true champion.” said Dani Alves as quoted by the Mirror.

Dani Alves recently proved everyone wrong in this year’s Copa America as he captained Brazil to glory and this trophy was the 40th trophy that he has won his footballing career. The gunners are interested according to reports in Brazil and it will be interesting to see if they are legitimate and they could since Unai Emery did say that he likes to have experienced players in his squad.