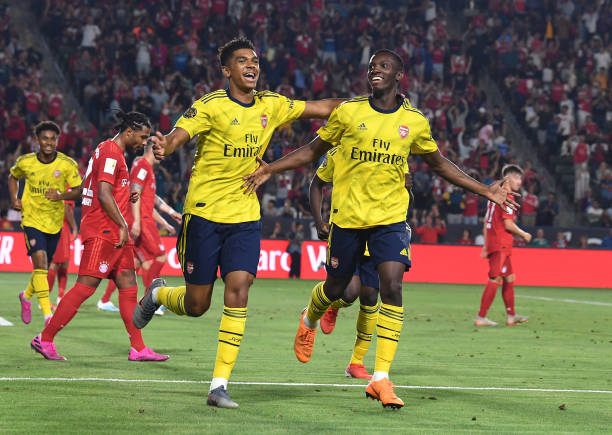 The gunners have started their pre-season matches and have so far played two matches with the latest one being a 2-1 win over Bayern Munich thanks to a late winner from Eddie Nketiah in the second half.

Arsenal came into this match with a strong lineup consisting of both Aubameyang and Lacazette and also Bayern Munich had also selected a great number of its senior players to play in this game. Unai Emery also decided to pair Granit Xhaka with Joe Willock in central midfield and the youngster didn’t disappoint the boss in this role that he was given.

Mesut Ozil started in his favorite central attacking midfield role and the German international put on an incredible performance and the Arsenal fans will be hoping that he keeps up with this form up-to the new upcoming season as they will need him to go back to his old days as most people weren’t happy with his performances last season. Aubameyang looked very fit in this match as he made a lot of runs on the flank since Lacazette played in the striking role, the Gabon international even got the assist for the own goal which Bayern Munich conceded.

The Arsenal defence was very poor once again as Shkodran Mustafi struggled in playing from the back in the first minutes of the game and also didn’t mark Lewandowski well hence the Polish striker equalising for Bayern Munich. Unai Emery later brought in more youngsters including Reiss Nelson, Bukayo Saka and Tyreece John-Jules.

Eddie Nketiah became Arsenal’s hero when he combined well with John-Jules to score Arsenal’s second goal of the day hence getting the gunners their first three points of the International Champions Cup. Arsenal’s next pre-season match will be against Fiorentina.